With yet another protagonist waking up without their memory, the first issue of The Field is a stylish but shallow bit of storytelling.

As I considered when I thought about Veil #1 a few weeks ago, we’ll always have amnesia narratives. Our sense of identity is so inextricably tied up with our memories that it’s almost impossible not to feel a shudder of empathy for a protagonist who’s had that taken away from them.

However, the first issue of The Field, by writer Ed Brisson, artist Simon Roy and colourist Simon Gough, fails to hit that level of identification. Instead, it’s a tapestry of fairly familiar elements that flows very nicely on the page but doesn’t land any emotional punches.

It kicks off with our (naturally) anonymous protagonist finding himself in the field of the title with nothing except a pair of undies (something denied to the lead of Veil) and a mobile phone, via which a mysterious benefactor offers advice that our man, apparently being sought by a biker gang, chooses not to take.

Things seem to be looking up for him when he cadges a lift with Christian, a garrulous if slightly unstable Bible salesman who lends him some clothes and takes him to an all-night diner for something to eat. However, it doesn’t take long for things to go severely south again… 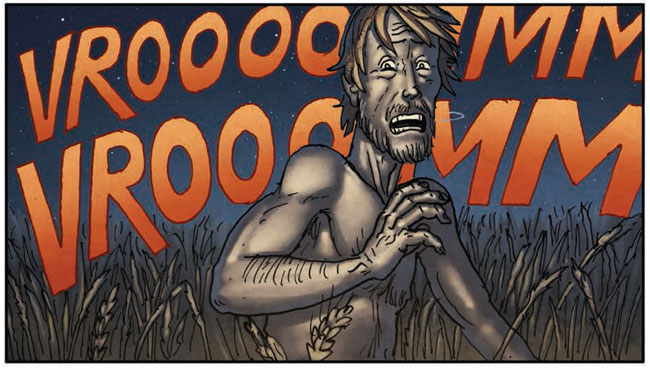 The Field is a well-executed comic, with a pacey rhythm and strong storytelling, but there’s something missing. Everything about the narrative feels a bit ‘cartoony’; it’s very much populated by ‘Characters’ rather than characters. The whole thing comes across as an amalgam of fictional tropes, rather than a narrative that reaches into ‘our’ world and touches us.

Simon Roy’s expressive, undergroundy art is as strong as you’d expect from his work on Prophet, while Gough’s colouring is probably the highlight of the book, especially in the moonlit outdoor scenes. However, you never forget you’re reading a comic. The form is always there in front of you, rather than acting as a vehicle to slip something unexpected inside your noddle.

Veil had a similar sense of artifice, but Greg Rucka’s spare script and Toni’s Fejzula’s stylised art and colouring choices created an immersive and atmospheric environment that drew the reader in. Sadly, with its post-Tarantino focus on snappy dialogue and shocking jolts of violence, The Field fails to generate that kind of depth.

I had high hopes for The Field given the recent work of its creators, but it turned out to be Just Another Comic: an amnesia story that probably won’t live long in the memory.