Tiwary and Robinson exquisitely meld history and fiction in this fully painted graphic biography of the legendary Beatles manager.

By the time Brian Epstein met the Beatles in 1961, they had become stars of the Liverpool club circuit and made two lengthy excursions to the less reputable nightclubs in Hamburg’s red-light district. But it was Epstein, a record store manager and soon-to-be music entrepreneur, who refined the band’s image into the world-famous mop-top, suit-wearing quartet they soon became. As the Beatles’ manager, Epstein oversaw the band’s finances from their rise to fame until his untimely death in 1967, a tragic event that John Lennon later identified as one of the causes behind the band’s split.

Writer and Tony Award-winning producer Vivek J. Tiwary scripts the graphic novel with a keen attention to detail. Where other books often struggle to convey a “period” feel, Tiwary’s writing does so effortlessly. While the characters’ conversations occasionally come across as stiff or awkwardly constructed, this is easy to forgive, as the dialogue is at times reminiscent of that featured in the Beatles’ fictionalized outings in their own films. 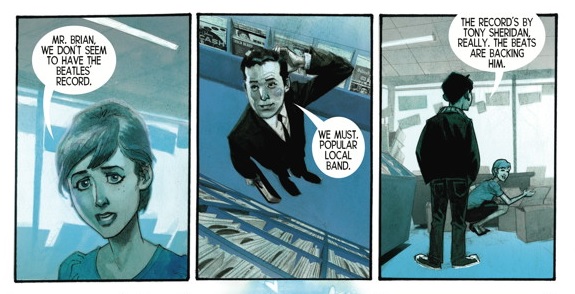 Artist Andrew C. Robinson, notable for his past cover work on Big Two titles like Starman and JSA, does a commendable job of conveying the distinctive look and mannerisms of the book’s characters. This is most evident in the more Beatle-heavy scenes, but even the side characters seem infused with personality and life in a way many other artists struggle to achieve. Even if it sometimes takes on a caricature-like quality, his art is always exquisitely detailed and as true to the characters and the setting as anyone could hope.

While The Fifth Beatle in some ways misses the finer points of historical veracity — Epstein’s secretary Moxie is an entirely fictional character, and early Beatles drummer Pete Best is conspicuously absent — one gets the feeling that the creators didn’t have total accuracy in mind, and in the end that isn’t a bad thing. Tiwary’s script and Robinson’s consistently high-quality art perfectly capture the Zeitgeist of the 1960s and the British Invasion, and what more could you ask for in a book like this? While “artistic license” may sometimes be used as an excuse to stretch the truth or to over-dramatize historical events, that isn’t the case here, and whatever liberties Tiwary has taken only serve to make the book a more engaging treatment of a little-known but highly influential figure in the history of popular music.