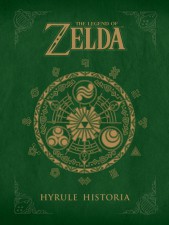 In a monumental year for entertainment, Dark Horse Comics has secured its place in video-game-art history with The Legend of Zelda: Hyrule Historia™, which charted in the top ten as one of 2013’s best-selling books globally.

In February, The Legend of Zelda: Hyrule Historia soared to the top of the Nielsen BookScan charts, making it the #1 book in America.

In addition, the book reached #1 on the Wall Street Journal and New York Times bestseller lists. Dark Horse announced a record print run, with the number continuing to grow as The Legend of Zelda: Hyrule Historia dominated orders in the UK, China, Italy, Spain, and Canada.

“We knew this book was going to be one of the highlights of the year before it even hit catalogs,” said Dark Horse’s president and publisher, Mike Richardson, “but no one could have predicted the unprecedented success and acclaim this book has received. Hyrule Historia has earned a place in the Dark Horse history books!”

This handsome hardcover contains never-before-seen concept art, the full history of Hyrule, the official chronology of the games, and much more! Starting with an insightful introduction by the legendary producer and video-game designer of Donkey Kong™, Mario™, and The Legend of Zelda™, Shigeru Miyamoto, this book is crammed full of information about the storied history of Link™’s adventures from the creators themselves! As a bonus, The Legend of Zelda: Hyrule Historia includes an exclusive comic by the foremost creative team of The Legend of Zelda manga—Akira Himekawa!

Praise for The Legend of Zelda: Hyrule Historia:

“Perfect for Zelda fans and appealing to gaming historians, Zelda: Hyrule Historia is a shelf worthy piece of non-fiction about a great fiction.”—Newsarama

“With the full gamut of chronology on full display and a nearly ridiculous amount of history and artwork to sift through, this collection is huge and exhausting. It’s also well worth it, as this guide is the only one in its existence that could gather so many facts about such a beloved series and make it as terrific looking as it is.”—EGM Now

“Hyrule Historia fulfills on its premise: a history of Hyrule, the wonderful, legendary world we’ve been falling in love with again and again since 1987. If you’re looking for the latest collector’s piece to celebrate your love for the franchise, look no further: Hyrule Historia is it.”—IGN

“The Legend of Zelda: Hyrule Historia is a work of love for all Zelda fans. The creative team really wanted to give something back to the people on the 25th Anniversary of the franchise and with this book they nailed it. With tons of concept art, an official timeline, insight into the creative process, and a wonderful comic, this book is one that any Zelda fan will find worthwhile. If you like Zelda, buy it.”—Weekly Crisis

Look for this highly sought-after release at your local comic shop or bookstore today! Order online through Amazon, Barnes & Noble, or Things From Another World!