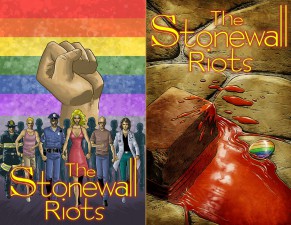 Bluewater Productions has been seeking funding through the crowd sourcing platform of Indiegogo to bring The Story of The Stonewall Riots to life in comic book form. With only a few days left we are coming to the end of an arduous journey that echoes the struggle of the gay rights movement we seek to represent. The Stonewall Riots are largely considered the beginning of the modern gay movement. The death of DOMA WOULD NOT have been possible without Stonewall.

Like the gay rights movement ,The Stonewall Campaign has been a tough fight with small victories along the way. We are far from our goal and far from giving up. The good news is there is still time to turn this into a success and you can help.

There are plenty of opportunities for you (yes you!) to help Bluewater Productions achieve our goal. Businesses are urged to place ads in this historical important document. Everyone is encouraged to contribute a little (or a lot)- even if its only a dollar- it takes a village- and that starts with a village person. Everyone is also encouraged to share and post and bring attention to this important piece of American history. Yes. American history. America represents freedom. Without equality there is no freedom. The Stonewall Riots were a plea to be heard and recognized as equals. This is our plea to be heard and recognized as an important project that honors American History. So, lend a hand. Be a village person- Do your part so Bluewater Productions can do theirs. Let’s get this book made!

Bluewater Productions are teaming up with a couple non-profits for this book – so Bluewater need the help to get this made. One being the “It Get’s Better” campaign as well as the original Stonewall bar. We still need to raise about $4,000 in 3 days – Bluewater knows we can do it!

Only 3 days left and Bluewater REALLY need the help! Bluewater has done some great LGBT themed title – one new one last week about HIV that was covered by HIV Plus magazine

Bluewater books are taught in schools and this would make a great addition.
COMIC BOOK TO COMMEMORATE STONEWALL RIOTS- BIRTH OF THE GAY PRIDE MOVEMENT

History remembers the sacrifices of icons like Rosa Parks and the efforts of Dennis Banks, Cesar Chavez, and other great defenders of American civil rights. However, less is known about the rise of the gay rights movement, which many say started as a result of the Stonewall Riots. Bluewater Productions looks to commemorate the event and examine its legacy in an upcoming comic book.

The Stonewall Riots, scheduled for release on the 44th anniversary of the infamous New York City riots this June, centers around the events and culture leading up to the riots, the incident itself and its historical significance as the genesis of the Gay Pride Movement.

“Civil rights are not just an American tradition; it’s a birthright,” said Bluewater president Darren G. Davis. “When I recognized that Stonewall was quickly fading into an obscure footnote, I had a obligation to remind people that civil rights comes in all colors, shapes, genders, political views and social choices.”

In June of 1969, a Greenwich Village, New York bar frequented by the then underground gay community called The Stonewall was raided by police. This sparked a violent incident, which quickly escalated into a fully-fledged riot and six-day siege.

The 32-page comic book is written by Michael Troy and illustrated by David T. Cabrera.

Troy (“A Minute with Margot” and “The Gays on Film”) added, “As time goes on, we’re in danger of losing this important touchstone of our cultural history. In an age where gay rights and marriage equality are still such hot buttons, it’s more important now more than ever, to remember the efforts of those who fought for gay rights.

The special edition comic book, which is being funded through a crowd sourcing campaign through indiegogo (like Kickstarter), is not the first book Bluewater has published that centers on gay issues. Several of the company’s popular biography comic books feature openly gay subjects such as RuPaul, Ellen DeGeneres, Rosie O’Donnell or cover alternative views on gay rights such as those covered in the Rush Limbaugh biography.

But more importantly, Bluewater was one of the first comic book publishing companies to breach the subject of HIV with their action-adventure fiction title Lost Raven. The main character learns he has been infected with the HIV virus and embarks on an odyssey of self-discovery. Lost Raven was awarded The Independent Book Publishers”, graphic novel of the year in 2009.

“Facing persecution, prosecution and a violation of civil rights, the homosexual community simply wouldn’t tolerate marginalization anymore,” Troy added. “But the aftermath of Stonewall lead to more demonstrations and eventually open dialogue and the establishment of some basic human rights. And that is what we are celebrating while we are flying those rainbow flags during the parades.”

According to Davis, interested patron can make financial pledges to the crowd sourcing campaign at the Indiegogo website: http://bit.ly/15NQqGg

Backers are entitled to various rewards based on their level of participation including being drawn into the comic, dedicating an issue and even having the books donated in their name to various national gay youth organizations. All of the money raised is being invested in the production, distribution and backer rewards of the book.