The 12-issue finale of metafictional mystery series The Unwritten starts with a virtuoso performance by writer Mike Carey and artist Peter Gross that brings the series and its protagonist very much back to life.

The renumbering of series is something that twists no end of melons down Comic Street, so there was probably a bit of eye-rolling and harumphing when it was announced that the concluding 12-issue arc of The Unwritten would kick off with a boxfresh #1 after its holiday hiatus.

Sure, you can see the commercial rationale for renumbering (although this far in, Vertigo’s claim that it’s “the perfect jumping-on point” seems a bit overcooked). However, a fresh start probably makes story sense too, given the world-ending white-out that wrapped up #54.

When it first hit the shelves, The Unwritten‘s metafictional mix of intelligence and imagination – depicting a conspiracy to control the collective unconscious of humanity through our all-important symbiotic relationship with ‘story’ – hit a real sweet spot for me (helped by the beautiful covers of Yuko Shimizu, which made it consistently one of the most attractive comics on the rack).

However, I have to admit that I fell slightly out of love with the series after the mid-30s highpoint of the epic War of the Word arc – and especially with the unwelcome intrusion of the Unwritten Fables ‘crossover’.

So, starting with a blank canvas gives us the opportunity to start over with Tom Taylor, who – having sounded the horn that ended the world of the Fables and foiled the final victory of Mister Dark – now has to reconstitute himself from the stuff of stories.

Reduced to just the raw potential for life – “unorganised matter, brute and blunt and meaningless” – Tom wills himself back into existence with the realisation that “life is a text”.

Then, in a structure reminiscent of Jamie Delano and Steve Pugh’s Flesh and Blood arc in Animal Man way back in 1992-93, Tom’s consciousness makes its way up the chain of life via a series of fictions, embodying the notion that “We can’t survive for long without the stories we’ve made for ourselves”.

After arriving as a disoriented insect in Aesop’s fable of the Ant and the Grasshopper, he variously inhabits the Ugly Duckling, a baby snake in Kipling’s Rikki-Tikki-Tavi, the Dormouse at the Mad Hatter’s tea party and, climactically, Aslan the lion, sacrificed on the Stone Table.

That propels him back to human form and the Potter/Milne/Grahame idyll of Willowbank Wood, from where he story-walks back to London—a city blighted by the maiming of Leviathan (the avatar of our collective unconscious, as embodied in stories)—and the start of the series proper.

However, even that synopsis doesn’t do credit to the narrative virtuosity that writer Mike Carey and artist Peter Gross bring to the issue. The book’s scope and ambition has always been one of the things I’ve loved about it, and the creative pairing – aided marvellously by colourist Chris Chuckry and letterer Todd Klein – don’t shy away from a challenge here. 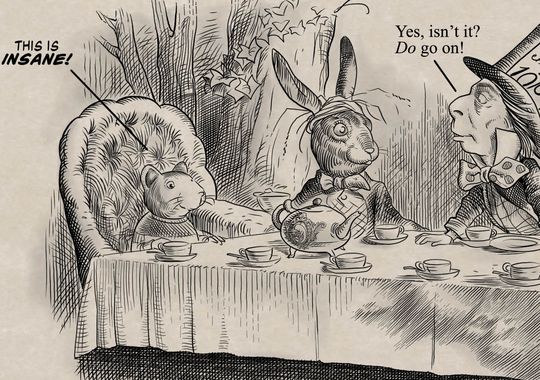 In a perfect use of the form, each section is delivered in a different art style. For example, reflecting Tom’s early stage of development, the Ant and the Grasshopper sequence is illustrated in very simple ink and wash, with the sketchy blue pencil lines visible beneath the action. The Ugly Duckling section is in thick charcoal, while the encounter with the Mad Hatter resembles Tenniel’s famous depiction.

Carey and Gross have produced so many hundreds of pages together by now that they’re clearly on the same wavelength, and it would be easy to take for granted their high levels of creativity and craft.

They consistently set themselves a high level of difficulty for their narrative acrobatics and here, in a promising start to the climax of the series, they land it almost perfectly. They cover an incredible amount of ground in these 22 pages, reintroducing the book’s set-up and getting its key player back in place for the endgame.