Catherine Meurisse’s The Young Woman and the Sea, published by Europe Comics, follows a young artist’s residency in the Japanese countryside – with the aim to draw nature. During her adventures around Japan, this ambitious artist encounters many a supernatural entity. These include a talking tanuki (a Japanese racoon), a ghostly woman, a poetless poet, and a grandmother who always seems to appear at just the right time, in geographically inexplicable locations. 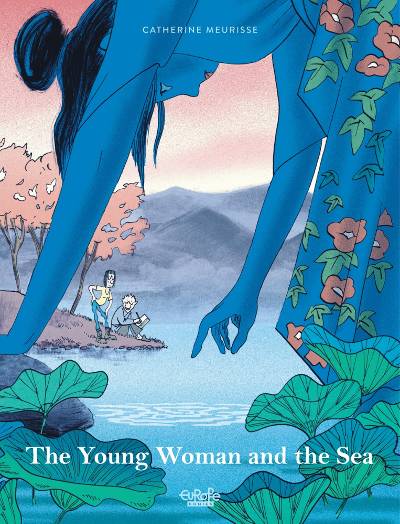 As our artist moves throughout the countryside on her explorations, colorist Isabelle Merlet’s use of high saturation makes the Japanese heat palpable. The bright, block colours and defined lines make the page vibrant and the stagnation of the day visible. Quite simplistic, caricatured people contrast against the detailed scenery, and multi-panelled pages full of discourse against the sudden full-page spreads taken up with the natural landscape.  This makes sense, as the Japanese scenery is a key focus of the narrative. In this way, the comic is reminiscent of manga; simple character design shown to be intentional as details peak out at a moment’s notice – often through backgrounds but sometimes also from characters themselves as they experience an intense emotion. 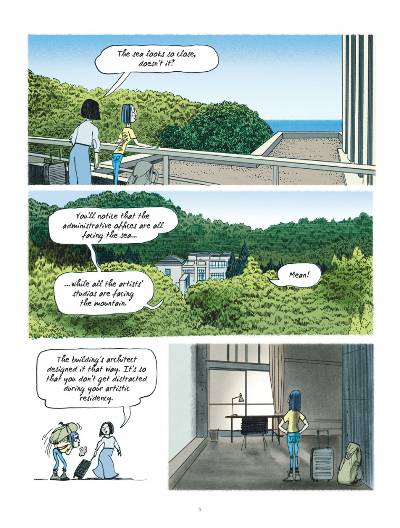 Whimsical, comedic dialogue contributes to these caricatured expressions, detracting away from the landscape whilst also elevating its dominance; no matter how silly things become, nature persists. This dual correlation between detail and solemnity, simplicity and superficiality – of, essentially, the divide between what is natural and what is performative (and perfunctory) – is shared between manga and the artistic style of The Young Woman and The Sea. Simultaneously, the fact that a story focussed on depicting nature has so many scenes focussed on these quirky characters emphasise nature’s dependency on us for this dichotomy to present itself. Without humans around, buoyant with their frivolity, nature would sink into the depths of the unobserved. 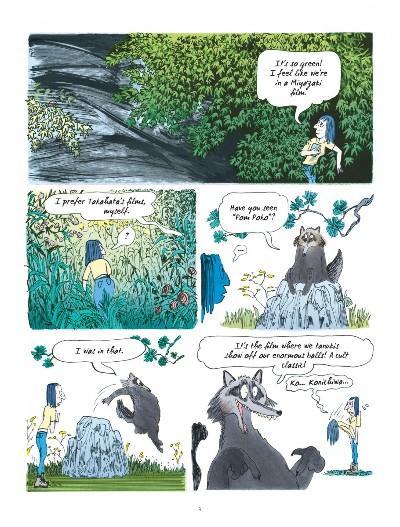 This eccentric tale takes Meurisse’s experiences from her own residency in 2018 at Villa Kujoyama and adds onto them a mischievous lens reminiscent of a fable. The abnormal encounters appear commonplace when placed beside the comical characters, and these both in turn evoke further the overarching sovereignty of the land; a presence that persists in every scene, indifferent to these unpredictable unfoldings.