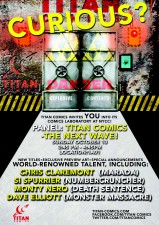 The next wave of publications features special advanced copies of classic fantasy epic Marada The She-Wolf by Chris Claremont (The Uncanny X-Men, Fantastic Four) and John Bolton (Man-Bat, Shame: Pursuit, Books of Magic). This is the first time anywhere in the world that fans can get their hands on this incredible new collection!

Comics legend Jim Steranko joins Dave Elliott on the Titan booth on Saturday, signing an NYCC exclusive A1 Annual print limited to 300 copies, the proceeds of which go to the Heroes Initiative.