Over the last few years Titan Books have published a number of handsome collections of classic comics work by legendary creators Joe Simon and Jack Kirby. These have included volumes on crime, super-heroes, a complete compilation of the Fighting American strips, and Joe Simon’s autobiography. Science Fiction is the order of the day for this latest hardback which presents, in chronological order, the duo’s space opera flights of fancy from the 1940s to the 1960s, both those where they worked in tandem and their solo offerings. 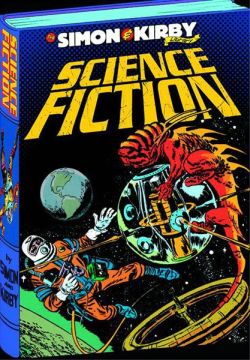 One of the fascinating aspects of a decades-spanning assemblage of work like this, of course, is the opportunity it provides to compare and contrast the emerging and developing styles of the creators involved. Indeed, the early 1940s Kirby work on offer here from the Solar Legion feature in Crash Comics Adventures only hints at the energy and power that will make him such a pioneering force in the years to come. Of particular note from this ‘40s era is the reprinting of the Simon/Kirby issues of Blue Bolt because, a few issues in, this Flash Gordon-esque feature was the first to credit the pair with a by-line for their partnership. In a heady mix of sci-fi standards, this series sees its titular character trapped in a lost underground world where he takes on the super-heroic identity of Blue Bolt to rally the inhabitants against the cruel dictator the Green Sorceress.

As we hit the 1950s section we’re treated to the usual selection of tales that revolve around traditional sci-fi themes from comics like Black Cat Mystic, Alarming Tales and Race for the Moon. “Don’t judge the monstrous-looking by appearance” is the tolerance championing lesson of ‘Gismo’, ‘Help’ and ‘The Emissary’ for example, while shorts like ‘Shadow Brother’ and ‘The Big Hunt’ are reminders not to tamper with scientific forces beyond our control. These one-shot stories are, perhaps, indicative of the pot luck feel usually associated with genre-specific comics anthologies. Fun to read from a historical perspective but largely formulaic and unremarkable in the greater scheme of things.

However, every so often, there are true flashes of inspiration that underline why these two professionals were to become legends in their field. ‘The Cadmus Seed’ from the first issue of Alarming Tales in 1957 foreshadows elements of Kirby’s Fourth World books in the ‘70s while ‘The Last Enemy!’ from the same issue is an obvious pre-cursor to Kamandi. And once again from that same comic, ‘The Fourth Dimension is a Many Splattered Thing!’ with its trip to a surrealist painter-inspired other-realm reminds us that this is the same Joe Simon who will go on to create truly bizarre books at DC of the likes of Brother Power, the Geek and Prez. 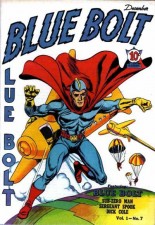 The bulk of the reprints in the 1960s are, perhaps, a little tangential to the main proceedings consisting, as they do, not of Simon and Kirby material but rather science fiction entries by other creators from Simon-produced books. The notable draftsmanship of Al Williamson is on show here, which is always a bonus, but they do feel like an addendum to the main attraction and the book’s prime focus.

As ever from a Titan book, the extra material is outstanding. This includes cover galleries, essays from Dave Gibbons and Peter Sanderson, and the pencil roughs for four pages of an unseen strip Tiger 21. The reproduction throughout is exemplary and represents some of the crispest vintage reprints I’ve seen in a volume like this in some time. Titan continue to do an exceptional job with their collections of classic comics from newspaper strips to Golden Age adventures, and The Simon & Kirby Library: Science Fiction is an excellent opportunity to enjoy the work of two giants of the industry in their formative years …and beyond.

The Simon and Kirby Library: Science Fiction is published by Titan Books priced £35.00/$49.95.