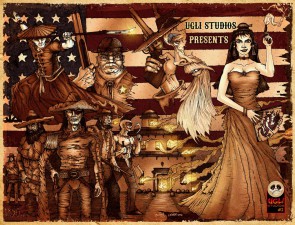 Studios Presents #2 contains three stories from artists Jason Lenox, Brian Allen and Joseph Freistuhler.  The anthology will be available during the summer of 2013 at select private signings by each of the artists involved and will be making its official release at the Baltimore Comic Con on September 7th and 8th, 2013.

Joseph Freistuhler is a freelance cartographer and illustrator. Joseph has several maps being published in the role-playing game industry.  This will be his first story under the Ugli Studios label.

Brian Allen is a freelance artist.  Brian’s first graphic novel, The Ends, was voted Best Sci-Fi Webcomic of 2009 by TheDuck Webcomics and has been published as The Ends #1 and #2 by Ugli Studios.

Dave Sharpe is a professional letter who has worked for Marvel, DC and various independent creators.  He is the letterer for Batgirl and Green Lantern.  Dave will be lettering the anthologies main story, “The Painted Ladies of San Quentin.”

A violent western set in the backdrop of a dangerous Northern California town in 1850 as a land deal gone wrong turns the wheels of violence on the guilty and innocent alike and only one man is willing to stand up for what’s right, Elijah Holman.

A dark but humorous story about a slave’s final attempt to deliver a mysterious package to the heart of an alien ship, and to send the invading creatures back home for good.

When a serial killer clones himself repeatedly to create the ultimate killing machine he learns an important lesson about natural selection.