As featured in a recent two part documentary focused on Gestalt that aired on Australian TV, Unmasked is another impressive release from the indie publisher. It follows Simon and Nancy, a married couple who know who they are (supervillains), and exactly what that entails (getting punched a lot). 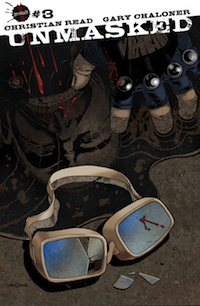 Given tasks by the Duchess (kind of like Amanda Waller to the Suicide Squad), the married pair soon become bored with black ops missions, despite the good pay, and hanker for some crazed supervillain action, which means fighting superheroes. Their first target is the biggest and best – a demigod called the Primortal. It doesn’t go well for the crazed pair.

Simon and his wife Nancy want to get back in the costumes, regardless of the consequences. They miss the thrills and because of their reckless attitude, they rub their fellow covert teammates the wrong way. They are a strangely likeable duo. You just know their thrill-seeking ways will have bad repercussions, but their love for one another and honesty about their dodgy morality make them almost sympathetic. Read has done well to fine-tune that balance. They could easily have come across as smug and annoying, but his approach never makes that a possibility. The writer has been fairly productive with Gestalt, launching the supernatural/Western OGN The Eldritch Kid: Whisky and Hate, and the publisher’s first novel – the dark and intense Black City, and with Unmasked, he can add another interesting project to that impressive body of work.

Chaloner’s work will be familiar with those who have been following the Australian comics industry for the last few years, and it’s great to see his talents on display in such an adventurous tale once more. Those outside of Australia may be more familiar with Chaloner’s clean lines from his work on Will Eisner’s John Law series, which was collected by IDW in 2004. The previous artist on Unmasked, Emily Smith, has a similar approach which means the transition between artists is a gentle one.

His work could perhaps be described as falling somewhere between Kevin Maguire and Eduardo Risso. Chaloner’s style is hard to resist. It’s all so…approachable, with a real weight to everything on the page, and a personality, and fleshed out appearance to all the characters. These are not perfectly toned beach bodies. These are real people, with flabby jowls, receding hair, and love handles, as we see in the nudity that is common in this raw series. Needless to say, this is a series for mature readers, and is available as a digital exclusive (with the series to later see a print collection).