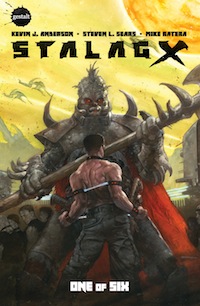 Stalag-X is a new digital 6-issue miniseries by Australian publisher Gestalt, known for their work with Injustice writer Tom Taylor, amongst other talents, and uses the unique set-up of “human P.O.W.s in an alien concentration camp.”

Anderson, whose large body of work includes a few issues of JSA and Tales of the Jedi and a host of novels such as the Dune prequels, writes this with Steven L. Sears, who has a history as a producer on television series such as Swamp Thing and Xena: Warrior Princess.

As all good sci-fi tales do, it begins in space, with a convoy from Earth being attacked by the Krael alien race. Things become so desperate in the battle that the crew of the human ship hastily enlist the assistance of the prisoners they’re carrying, but their last stand is for naught.  However, one of the prisoners takes the opportunity to painfully remove his ID chip, with the mystery of this surly blond as the apparent centre of the remaining issues.

Mike Ratera’s (Conan) artwork is fluid yet not overly realistic, kind of like a less detailed Juan Jose Ryp. Each character (of which there are many of the two species) is drawn as an individual, and the violence is thankfully not over the top for a book that is filled with tough characters facing death and destruction. The Krael’s look is rather ornamental, with flowing robes and spiky weapons and they certainly appear formidable, and unfamiliar, especially with their dialogue shown only as alien symbols.

The humans’ expressions usually steer towards fear (understandably so), but when the captives are taken to the terrifying prison of the title, they meet two others of their kind; a weaselly collaborator and an attractive female, both of whom know the language of their alien masters.

The premise is handled efficiently with ruthless relish from a story and art standpoint, and the mystery of “Joe Human,” as the blond survivor calls himself and how he’ll interact with the Krael researcher known as “Mengele,” after the sadistic WWII Nazi doctor, is certainly foreboding.

There’s a lot to like in this debut and although we’ve seen stories featuring ugly aliens and their desperate human enemies before, there are enough intriguing pieces in this puzzle to make the next five issues worth reading.