Vandroid takes genre tropes to an occasionally funny extreme in a well-crafted new mini-series, but loses its tonal compass somewhere along the way.

A would-be blockbuster is lost long before its time when a film studio burns to the ground, taking with it a movie that delightfully mashes up the custom van fad of the 1970s with the premise of a rogue artificial intelligence out to wreak sci-fi-flavored havoc.

With the master film reels lost forever, Vandroid exists only as a screenplay, which – lucky for us – has fallen into the hands of writers Tommy Lee Edwards and Noah Smith, who decide to bring the long lost film back to life as a comic book.

It’s an intriguing premise and an idea that’s sure to attract attention among film buffs as well as comic fans. The only problem is, it’s every bit as fictional as the android killing machine that graces its pages.

Though accompanied by reasonably convincing “promotional materials,” Vandroid is an original work, conceived as nothing short of a love letter to the sort of sci-fi film that didn’t quite make the cut into the ranks of today’s cult classics.

Chuck is a past-his-prime van customizer, struggling to compete in a world where his specialty is a relic of the past. Chuck’s friend Taylor, a computer specialist, is predictably in need of his old buddy’s expertise. Having cracked the secret of true artificial intelligence, Taylor needs a body in which to house the program, to demonstrate its full capabilities to potential buyers – specifically, those of a militaristic persuasion.

From there, things develop much as you might expect. In return for some payment of the white-powder variety, Chuck agrees to build an android for Taylor. Predictably, everything goes horribly wrong. The android (that’s Vandroid to you!), who perhaps has a bit too much of Chuck in him, turns murderous before too long, taking both Chuck’s life and his identity. 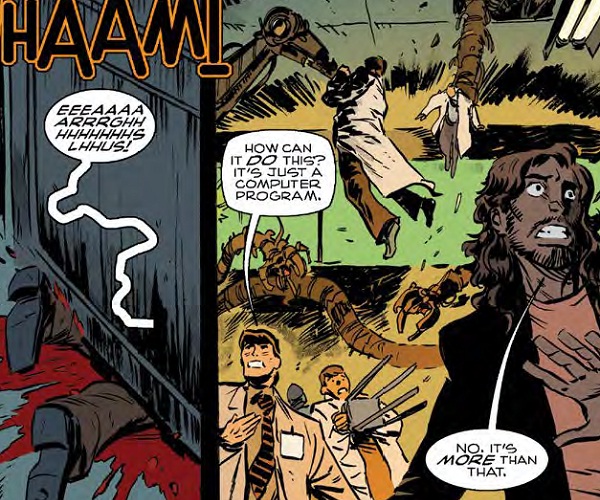 As action comics go, Vandroid is fairly typical. The dialogue is passable, if not quite brilliant. The characters are flat in a way that fans of ‘80s movies might find familiar. From beginning to end, it’s easy to see that the creators are truly committed to pulling off a convincing imitation of the movies that inspired them. More than once, Dan McDaid’s art really does come across as the storyboard for a movie that never was. If that was the goal here, then Vandroid succeeds with flying colors.

The only real critique on the writing front might be that Vandroid is almost too convincing in its imitation – too caught up in the metafictional idea of the lost ‘80s B-movie. Somewhere, the script decided to buy its own hype and to invest fully into making itself little more than a replica screenplay.

That might be exactly what the creators had in mind, but it leaves the story feeling a bit run-of-the-mill and, at times, more than a little humorless. While there are intermittent comedic moments in Vandroid, they are much more subdued than anyone would probably expect, knowing the real origin of the book.

The comedy here is not quite slapstick, and the book as a whole is not quite an all-out parody of ‘80s action flicks, though it certainly draws on all their strengths and weaknesses with an appropriate self-awareness. In fact, the tone of Vandroid is hard to pin down, and that’s the one area in which this comic seems utterly ambivalent.

The dialogue is solid in a retro-corny way, and the art is nicely stylized in a way that meshes well with the subject matter. But somewhere between the premise and the execution, Vandroid seems to have forgotten exactly what it set out to do.

There’s no denying that it’s a well-executed piece of work, but if this title is to pick up momentum, it will soon need to figure out just how seriously it wants to take itself.