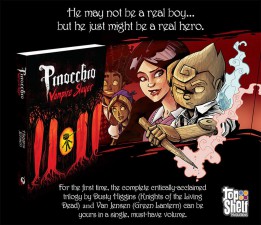 When bloodthirsty monsters invade Pinocchio’s hometown and kill his father Geppetto, Pinocchio discovers a new benefit to his magical nose: telling lies produces a never-ending supply of wooden stakes to combat the vampire hordes! Will Pinocchio be able to defeat these horrors, avenge his father, and save his friends?

Jensen (Green Lantern Corps) and Higgins (Knights of the Living Dead) present a captivating blend of comedy, horror, romance, and adventure, rooted in the original Italian novel but brought – as if by magic – to new life.