A supernatural thriller, this is the Witchblade you’ve been waiting for.

Writer Ron Marz understands Sara Pezzini the way Jeph Loeb understands Batman—inside and out with an emphasis on the inside. As the longest-tenured writer of the character, Marz gives Sara the endearing qualities of a hero who struggles to become the person she wants to be. She carries a great weight of responsibility as the bearer of the Witchblade, and its presence in her life has exacted a costly toll at every turn.

With the ‘Born Again’ storyline, Marz moves us from the present where Sara is a small-town sheriff who was just shot in her own office to two years into the past as she enlists the help of the Magdalena to remove the artifact from her wrist and her life. Sara struggles with the decision, but after killing Jackie Estacado she acknowledges her inability to control the Witchblade. Patience offers sound counsel, “I can help you seal away the Witchblade, Sara…but you have to be the one to rid yourself of it.” 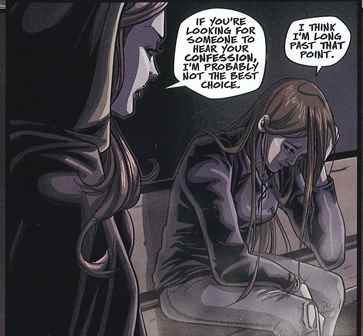 Back in the present, Deputy Kate Rooney struggles to solve the mystery behind Sara’s shooting and the very specialized bullet the surgeons removed from her abdomen. Interim sheriff Pilcher isn’t high on Rooney’s list of her favorite people, and she realizes that she’ll be solving this on her own. Low on sleep, she goes to the hospital to discover Sara’s guard murdered. She confronts the knife-wielding assailant who promptly slices into her shoulder before the dramatic arrival of a winged warrior the assailant identifies as Angelus.

It’s safe to say that with the arrival of a male character believed to be Angelus, Marz is uncovering some big plans for this title. Sara and her supporting cast are in good hands as Marz has dialed back on the action (temporarily, I’m sure) in favor of character and plot development. It’s a solid and welcome turn of direction for this book. Laura Braga’s artistic style is an excellent complement to the story. Her use of shadow and attention to facial expressions bring life and emotional weight to each character. The female characters in particular carry an air of mystery and sense of purpose that Michael Turner would have appreciated. Colorist Betsy Gonia uses muted sepias for the trips to the past with great effect. The present exists in shades of grays, so much so, that the panels containing blood contrast sharply with their vivid reds.

This is the time to join in on Witchblade. The creative team is establishing a book that should satisfy those seeking solid storytelling paired with expressive art.