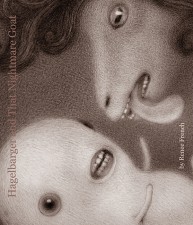 Hagelbarger and That Nightmare Goat is a stunning vignette full of rich imagery and comics hi-jinx that tells the tale of Renee’s favorite bulbous aquatic hero, Hagelbarger, in a perilous adventure with his pals Tiffo and Hap, battling that villainous goat. (Softcover, B/W, 109 pages, ISBN: 978-0-9854138-2-8, $18.00)

“So many words could be used to describe Renee French’s work: Somber, frightening, desolate, primal, vivid, palpable. But I’m not going to use any of those. What fascinates me is that juxtaposed with the words I’m going to use, are characters of undeniable cuteness. How the hell does she do that?” – Laraine Newman
Renee will be signing her new book at the Yam Books table (Table 523) this weekend, and will be a part of two panels back-to-back on Saturday. See details below. Yam Books will also have newly released Sky in Stereo #3, by UK/St. Louis cartoonist Mardou. Along with Renee French, special guests at the table are Lark Pien (Long Tail Kitty) and Josh Frankel (Seafood, Garbage Time All-Stars). We will have prints, zines, comics and original art for sale! Stop on by!

San Francisco’s comics history runs deep, from the first modern comic strip in the late 1800s to the birth of the underground comix movement in the 1960s. The Bay Area continues to produce some of the world’s top cartoonists, and the Cartoon Art Museum’s Small Press Spotlight focuses on the works of these talented individuals. Cartoon Art Museum curator Andrew Farago joins artists Susie Cagle Renée French, Justin Hall, Roman Muradov, Fred Noland, and Andy Ristaino, as they celebrate the tenth anniversary of this ongoing exhibition and talk about the past, present, and future of comics in the Bay Area.
Graphic Novels Versus Collected Works
Saturday October 12, 2013 2:45pm – 3:45pm

For a cartoonist, putting together a complete graphic novel or gathering the material needed to fill a book of collected works is no small undertaking. Moderator Doug Neff (Toucan Learning Systems) talks with panelists Colleen Coover (Bandette), Renée French (The Ticking), Bill Griffith (Zippy) and Anders Nilsen (Big Questions) about how their processes differ and what unique challenges they face when putting together these astounding projects.