Noah Van Sciver’s uncool characters revamp the underground tradition of Crumb and company, in a funny and intense collection from AdHouse Books

“Noah Van Sciver is a throwback. The kind of cartoonist one saw back in the 1980s. Genuinely interested in characters and stories and real cartooning. If he had been around back then he’d probably have been a star. The guy’s got talent. He’s probably the next Clowes or Crumb or Brown”. 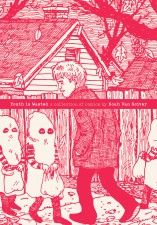 These words by Seth, the author of Palookaville, are on the back cover of Youth is Wasted, the new book by Noah Van Sciver, published by Adhouse Books. Seth underlines an important fact: Van Sciver is an author interested in characters, in stories and in doing comics.

He doesn’t deal with experimentalism or with brilliant colours, and he doesn’t work for other media. He focuses on storytelling and draws in service to the story, without frills. He’s also incredibly prolific, since he’s continuously publishing comic books, mini-comics, graphic novels, sketchbooks and webcomics.

Most of the comics in Youth is Wasted are taken from his series Blammo, along with some anthology submissions and 1999, an out-of-print title published by Retrofit Comics. If The Hypo, released by Fantagraphics, was Van Sciver’s most challenging work up to now, Youth is Wasted is a sort of “best of”, and an excellent starting point for getting to know one of the best contemporary cartoonists.

In most of his stories, Van Sciver draws a gallery of ugly, uncool and sometimes dirty people, acting in an anonymous urban space, often with a sneer on their faces tending to stupidity. 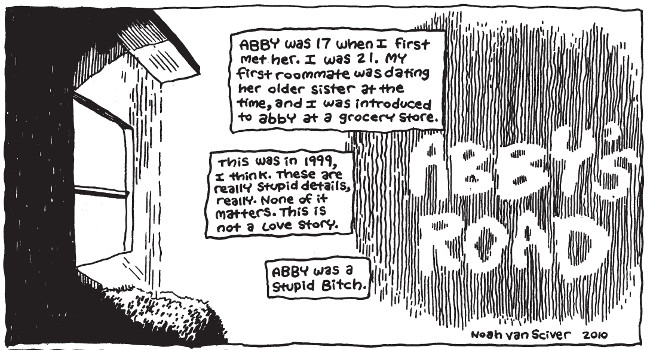 They’re mostly losers, like Anthony in ‘Abby’s Road’, Jesus in ‘Who are you, Jesus?’ and Mark in ‘1999’ – three funny but also bitter tales that perfectly represent the author’s typical output: characters tending to the easy-minded, cynical and resentful do humble works and live hopeless relationships, being fooled by a woman smarter than them. However, it’s easy to sympathise with their quirks and flaws, maybe because they show themselves as they are, highlighting thoughts and impulses that the rest of us tend to hide. 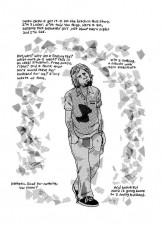 Among the three, the best is definitely ‘1999’, set at the end of the old millennium: Mark starts an affair with Nora, a coworker who claims to have an open marriage. The relationship engages him more than it does her and becomes – literally – a nightmare. ‘Because I Have To’ is similar to these tales at first glance, but it’s a deeper piece, where the Denver-based cartoonist doesn’t try to amuse the reader but introduces a reflection on death, tinged with melancholy.

In some of Van Sciver’s comics an autobiographical interpretation prevails, although the author’s experiences are mixed with stories heard from friends or in a bar, some fiction and a lot of irony and sarcasm.

For example, we know from his sketchbooks and from the notes at the end of this book that he broke up with a girlfriend a couple of years ago. And so Kramer, the main character in ‘Expectations’, meets his former long-term girlfriend at a party. The dialogue is vivid and seems almost real: perhaps it is. 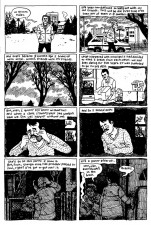 But Van Sciver doesn’t limit himself to pure and simple realism. The party scene in ‘Expectations’ is indeed characterised by a hilarious comparison between a sentimental break-up and a house move, and it’s inserted between two visits to Okane Park, a park built on a cemetery (inspired by a real place in Denver) where Kramer meets a ghost. The cynical irony and the bizarre element are always around the corner, making the author a worthy heir of the underground tradition.

In ‘I Don’t Love Anyone’, inspired by a dream, the theme is still the break-up, treated potently in only one page. A drunken girl thinks of an ex-boyfriend and returns home sad and alone, but when she goes to bed she realises that their relationship ended months earlier and that she has entered the apartment where they had lived as a couple, now inhabited by someone else. ‘I Don’t Love Anyone’ also shows a different style, with a clean line, feminine lettering and a main character who seems to have come out from the pages of Love and Rockets.

This story is one of Van Sciver’s most successful graphic efforts, and it shows a remarkable stylistic growth: not surprisingly it was published in the latest issue of Blammo, along with ‘The Wolf and The Fox’, the best of the three fairy-tale comics in the book, full of lines, details and frames.

Then we have some comics based on smart ideas and funny gags, such as ‘Punks Vs Lizards’ (a clash between giant lizards looking to dominate the world and punks as the last bastions of mankind), ‘Roommates’ (a manifesto of hatred and misanthropy that recalls Ivan Brunetti) and – especially – ‘It Can Only Get Better’, in which Van Sciver imagines the wealthy and licentious life of a cartoonist in the nineteenth century.

Do yourself a favour: read Youth is Wasted.