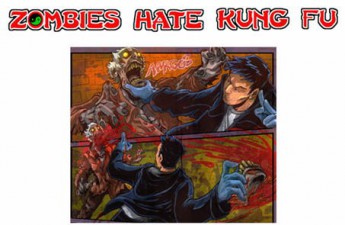 Exciting new comic book creation, Zombies Hate Kung Fu, takes another look at the well covered zombie genre with a few twists you won’t have seen before. The most noticeable is the new approach to Kung fu, while most comic books featuring martial arts are about as authentic as fortune cookies, this effort utilises an experienced Hong Kong film action choreographer.

This venture is the creation of British writer Ricky-Marcel Pitcher, who along with American artist David Velasquez and Hong Kong fight choreographer Leo Au Yeung, provide the international cast of comic creators.

The fist graphic novel is seeking funding through a KickStarter campaign, it covers a self contained story, introducing a Kung Fu expert called Mann and a horticulturaly gifted slacker named Ziggy. The two form a unique partnership, combining their disparate skills and allowing them to thrive in the face of the zombie apocalypse. Mann and Ziggy’s ‘easy’ life of growing, trading and fighting is suddenly disrupted when they run into a scientist who has her own theory on the origin of the ‘zombies’, and how to deal with them. Reluctantly, Mann and Ziggy get thrown into her adventure of scientific experiments and running battles with a mysterious band of heavily armed strangers, along with their regular tangles with zombie hordes.

Master Leo specialises in the southern Chinese martial art of Wing Chun, popularised by Grandmaster Ip Man, who is also notable for being Bruce Lee’s martial arts instructor in the 1950’s. Among Master Leo’s Hong Kong credits is his choreography work on the 2008 film

‘Ip Man’ (a biography of the Grandmaster), this went on to win several awards at the ‘Hong Kong Oscars’, including Best Film and Best Fight Chorography.

Master Leo will study the script for Zombies Hate Kung Fu and use his Kung Fu knowledge and film choreography experience to design fight sequences to the quality of a hard-hitting Hong Kong blockbuster. Then the full fight scenes will be acted out by Master Leo and his students (as the zombies and villains) while filmed from multiple angles. This will provide the comic team with a storyboard of Kung Fu positions to be loyally reproduced for a authentic Chinese martial arts flavour.