One careless moment, one dreadful accident, and one terrible, misguided decision. Dominoes begin to topple in a chain of cause and effect that will change the lives of the residents of Riverdale forever…

It’s interesting to note that for a publisher so steeped in 70 years worth of tradition Archie Comics are currently providing both progressive and relevant approaches to the characters in their universe. They’re also proving themselves unafraid to experiment with those creations and Afterlife with Archie, the newest, and most assuredly not all-ages, addition to the Archie mythos puts our favourite teenagers and supporting company into a scenario that would have been inconceivable when the eternally fresh-faced Mr. Andrews made his debut all those decades ago in Pep Comics #22.

When Reggie Mantle’s irresponsible behaviour results in the vehicular hit-and-run death of Jughead’s canine chum Hot Dog the normally lethargic glutton is spurred on to take drastic action. With the aid of teenage witch Sabrina the perished pooch is brought back to life through a necromantic spell… but with terrible consequences. Some magics should not be wielded by those incapable of dealing with the results, and in attempting to reverse the frightening fate of a pal’s pet, Sabrina has instead created the catalyst for an undead plague of zombies that will plunge Riverdale into the darkest night in its history. 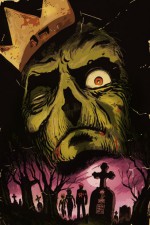 As unlikely announcements go Afterlife with Archie was probably the oddest and most incongruous sounding use of the character since Archie Meets the Punisher was given the green light twenty years ago. While it seems a little late in the day for leaping, or perhaps shuffling, onto the The Walking Dead bandwagon this book shouldn’t be dismissed out of hand as a tardy exercise in pop cultural opportunism. What creators Roberto Aguirre-Sacasa and Francesco Francavilla provide here is a surprisingly effective and tense supernatural thriller that finds a perfect balance between the familiar and the out of place.

Aguirre-Sacasa, of course, is a writer with an excellent pedigree in weaving stories set in the darker corners of established comics continuities. His Nightcrawler and Dead of Night: Man-Thing series at Marvel, for example, are testament to that. He’s astute enough to know that while this has to be recognisable as the Archieverse we know and love it’s vital that events are played entirely straight if the storyline isn’t going to lapse into pointless parody.  And this is indeed a most startling horror set piece, perfectly paced, with a creeping sense of dread pervading throughout as the bleakest things begin to happen to characters we have always known only in a context of lighthearted whimsy and agelessness.

Francavilla builds on Aguirre-Sacasa’s sturdy storytelling foundations with art that takes on a far more realistic, less obviously cartoony nature than we are used to seeing in Archie strips but never at the sacrifice of reader identification. Again, that’s a vital part of the book’s success in engendering an emotional response from its audience. So much of Afterlife with Archie’s effectiveness is in that delicate balancing act of moving fanciful comedy creations into a far more sombre environment without changing them so drastically that the readership’s affection for them is sacrificed in the process. In that regard Francavilla plays a blinder here. Final mention for the shadowy, subdued colouring he employs. It’s highly effective in building mood with the heavy use of orange hues evoking a suitably autumnal Halloween atmosphere.

As long standing relationships come to an abrupt end and old favourites embrace terrifying fates Afterlife with Archie proves to be a most poignant and creepy sidestep into a parallel Archie Comics reality. Banish your weary cynicism and shun all undue pessimism that this book is just another unnecessary addition to the zombie comics glut of the last few years. What Aguirre-Sacasa and Francavilla have achieved here is a gripping and taut tale that will make you care for these much loved characters in ways that you never have done before. An absolute must-read for Halloween!