Monarch and hero, Aquaman has intriguing challenges ahead.

With issue #26, Jeff Parker (Batman ’66) takes over the reins from Geoff Johns and has a daunting task ahead of him. Thanks to Johns, Aquaman is cool again, and the book is one of DC’s biggest New 52 success stories. (It’s okay to admit that Aquaman is cool now, and if you need more proof consider that Sheldon Cooper wears an Aquaman T-shirt in seasons 3, 4, and 5 of the Big Bang Theory.)

It’s clear from the start that Parker is going to continue to explore Arthur’s difficulties as the monarch of Atlantis, and this is essential to maintaining a sense of purpose for the character. Arthur isn’t popular among his subjects because he grew up on the surface, and his struggles for acceptance under water and in his surface hometown define and shape his roles as king and hero. Never at issue is Arthur’s commitment to protect and assist people, but Parker makes clear that Aquaman’s obligations as king will oppose his heroic instincts. It’s an excellent source of conflict that should create interesting obstacles for Arthur to overcome in future issues.

Aquaman and Mera are formidable team. And when Parker writes action sequences, he doesn’t shy away from revealing that these two are one of the most beautifully complementary pairs in comics today. Rescuing Atlantean engineers from the sudden convection current of a lava vent, navigating the unfriendly political waters of the royal council chambers, and the revelation that Mera’s powers are sufficient to launch Arthur into the stratosphere sets an exciting course for them as rulers and heroes. 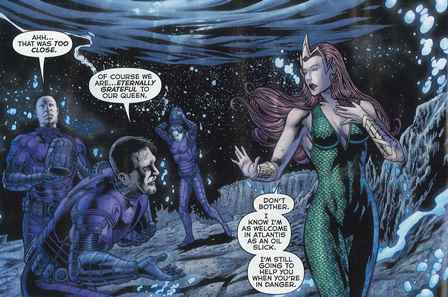 Parker strikes a good balance between character development and action in this issue. Watching Aquaman fight the Karaqan is a treat—let’s face it, we all love seeing him fight sea monsters. And the twist on the last page presents a mystery that will have you adding Aquaman to your pull list.

Paul Pelletier stays with the title, and it was a good decision. His depictions of Atlantis and the underwater scenes are stunning. And it’s quite clear that Pelletier enjoys a good brawl with a leviathan of the deep, too. I do have a request, though, Paul—please keep Aquaman on the handsome side of “ruggedly handsome” if you would.

Issue #26 is a great time to jump onboard with this title, the interesting and entertaining storylines are backed up with vivid art. There is genuine depth here, and I don’t just mean the ocean.