The success of Batman ’66 continues to build as Bruce Wayne once again shares the stage with Britt Reid, in Kevin Smith, Ralph Garman and Ty Templeton’s joyful tribute to one of TV’s most iconic crossovers.

Way back in 1967, two of TV’s biggest shows staged an iconic two-episode crossover. The dynamic duo of Batman and Robin crossed paths with the Green Hornet and Kato, fighting together against the nefarious scheme of Colonel Gumm.

Nearly a full 50 years later, the two sets of heroes are reunited against the same villain in Batman ’66 Meets the Green Hornet #1, the first issue in a six-part mini-series written by Kevin Smith and Ralph Garman.

When a train loaded with priceless fossils en route from the Gotham Museum comes under threat, Bruce Wayne decides to use his influence as chair of the Museum Board to accompany the precious cargo. On board, he encounters newspaper publisher Britt Reid and his valet Kato, who intend to cover the journey of the fossils from Gotham to their hometown.

Of course, the threats against the fossils are realized when General Gumm – having received a “field promotion” after being horribly disfigured – hijacks the train and begins to loot the cargo. Coincidentally, the Green Hornet and Kato arrive on the scene, as do Batman and Robin, but Gumm manages to trap the heroes and escape with the fossils.

Taking their cues from the original series, Smith and Garman keep the plotline very simple, allowing them to devote their considerable talent to realizing fully the camp 1960s tone – the nostalgia for which is the cornerstone of Batman ’66‘s success.

From General Gumm using a super-adhesive to stop the train dead on the tracks to Bruce and Dick ‘covertly’ speaking via Bat-cufflink radios, Smith and Garman and show incredible respect for the source material, capturing each character’s signature speech pattern and embracing the sense of fun that characterized the television series.

The same joy that is woven into Robin’s “Holy epoxy!” or Kato’s dream of a proper sidekick codename is mirrored in Ty Templeton’s buoyant artwork. The crisp lines and solid, vibrant colours (provided by Tony Avina) echo the simplicity of the plot, which is less about realism than it is about adventure and imagination. 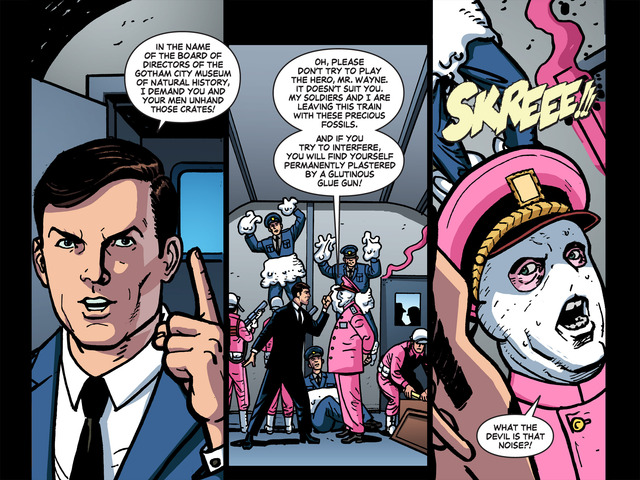 Templeton’s strength in Batman ’66 has always been capturing the trademark physicality of Adam West and Burt Ward, to which he adds an impeccable visual impression of both Van Williams and Bruce Lee – in the case of the latter, perfectly immortalizing both his understated stillness and incredible athleticism.

Add to that the stunningly powerful cover art by comic book legend Alex Ross, and this series breaks the Awesome Nostalgia meter. Indeed, even after reading the issue several times, I find it difficult to separate my few criticisms (Gumm’s unnecessarily dark disfigurement, for example) from the very tangible joy that I feel in every panel.

It’s difficult to find critical fault in camp; every manoeuvre, no matter how incongruous, feels like a brilliant and deliberate subversion of the hyper-realistic tone we’ve come to expect from our storytellers.

In the end, the entire point of Batman ’66 is to remind readers that comic books are fun – or at least they are meant to be. The 1960s TV series did a beautiful job in teaching that lesson, and thus far the comic’s nostalgia-tapping has honoured this legacy. Batman ’66 Meets the Green Hornet trusts in that legacy, and the result is a comic that you can’t help but enjoy.