It’s action-romance. And it works—you’ll love them together.

The best partnerships in comics have been those where both characters accept the imperfections of the other and make progress toward understanding. They often have opposing backgrounds or philosophies but successfully work together because of their ability to fill in the missing pieces and complement one another. So how do you handle a partnership between two of the most powerful beings in the DC Universe who are also romantically involved?

Writer Charles Soule seems to have the answer: you handle a super-powered couple just like any other successful partnership. With Superman/Wonder Woman #1, Soule has given us a fresh interpretation of action-romance as a genre. He is navigating the planet’s most powerful heroes through a relationship while creating personal obstacles that affect their growth as a couple and life-threatening challenges that solidify them as a super-powered team.

Clark’s need to maintain his secret identity and the secret of his relationship with Diana isn’t settling well with the Amazon princess, and her insecurities are highlighted in a terrific sequence with Hessia of girl talk mixed with a sparring session—they are Amazons, after all. 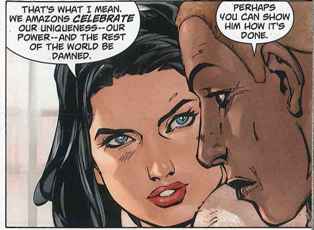 Diana discovers that while she and Clark have much to learn about one another, they have just as much to teach. Perhaps no other DC hero could get away with telling Clark, “You’re so strong, Clark, but you’ve never been trained to fight. Power isn’t everything.” And Clark offers a reasonable explanation for maintaining secrecy, “We give them everything. This is ours. At least for now.”

Action is a priority with this title. When the JLA satellite finds an unusual storm in the North Atlantic, Superman and Wonder Woman respond. While she rescues an airplane, he goes to the storm’s underwater source only to get knocked out of the ocean and right into the plane Diana has just righted. When Superman leaves to get the pilots to safety, Diana comes face to face with Doomsday. She’s about to have a long day.

Creating this interesting balance of romance and action on the page is handled in gorgeous fashion by artist Tony S. Daniel (Batman, Action Comics). Sultry and strong, his take on Diana is a powerful representation of the daughter of Zeus deeply in love. Clark is the embodiment of quiet strength, and his confidence in their ability as a team shines through every panel. Kudos for the silhouettes, they speak volumes. Daniel’s detailed work on the action sequences is stunning—the man loves a good explosion. And his Doomsday is straight out of a nightmare that has festered and grown since 1992.

Superman/Wonder Woman #1 is definitely a successful partnership. Give this one a try, and let us know your thoughts.