“Here we all are, at the grand finale.” – Talia Al Ghul

There is a lot to do in order to round off the whole story in these pages.  It begins with a framing device of Gordon interviewing Bruce Wayne, with the main clash with Talia in flashback.  There’s some lovely stuff between Gordon and Bruce Wayne.  Morrison understands the interplay between these characters, the cat and mouse (well, cat and bat), the things left unsaid. He almost certainly knows Wayne is Batman, but he also knows they are different, that each are separate entities and that it doesn’t matter that they share the same body.

There are a few maybe slightly too convenient little plot points. Talia ordering her people to end Leviathan if she doesn’t return and then Kathy Kane appearing at the last minute to save Batman stand out in this light.  Some would call them Deus Ex Machinas, others a logical progression from what has gone before, call-backs to things he’s set up in previous issues.  Morrison divides, but here, as so often, he also conquers.

As for the art, Morrison’s Batman run has been blessed with work from the best artists in the industry, but possibly the highlight has been seeing the emergence of Burnham into an incredible new force in superhero comics.  Let’s hope he’s always coloured by Fairbairn who here contrasts a subtle pastel palette for the Gordon/Bruce Wayne scenes with bright block colours for the operatic showdown between Batman and Talia to magnificent effect.

So in the end, was Morrison’s the greatest run on Batman ever?  The definitive take on the character of modern times?  That’s a matter of taste.  It was certainly the most technically interesting.  The academic exercise of bringing old stories into continuity, and then, ironically, clashing with the New-52 DC continuity change, added an extra meta layer to the story that Morrison no doubt appreciates. Ideally this should all have been wrapped up before the New 52 started, but there’s been nothing ideal about the New 52. 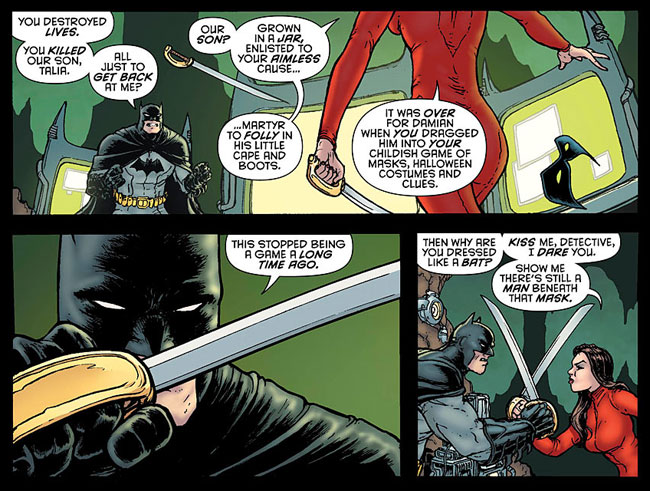 One is reminded of Morrison’s X-Men run and some of the continuity and character issues he left in his wake; things that only work if it’s the last story you can ever tell about those characters.  In many ways this is what he has done with Batman.  We are given a potential ending to the Batman mythos, something that would round off the pre-52 Batman and lead to his potential re-emergence in The Dark Knight Returns.

But instead Morrison also reminds us here that these stories never end, that there will always be a Batman.  It’s AN ending, not THE ending and, to paraphrase the end of another great Bat story, it was a good ending…good enough.