With their tale of a young girl finding out about her grandfather’s life, creative pairing DS Talon and EG Thompson have produced a touching narrative about the power of the stories we create. 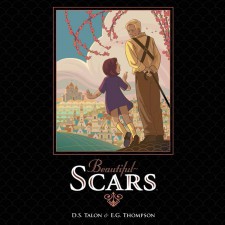 On their effusive thanks and acknowledgements page, Durwin S Talon and E Guin Thompson – the creative team behind Beautiful Scars – make the assertion that ‘Everyone who has a scar has a story, and it shows a life well lived’.

While I’m sure there are plenty of appendectomy patients and assault victims who’d beg to differ (and my own single scar results from the banality of having a nightmare, pushing myself out of bed and plunging face-first into a radio), it’s a premise that effectively drives this pleasing fable about family bonds and the power of storytelling.

When author Madeleine Shaw receives a copy of her debut book, the first person she wants to show it to is her grandfather, Ridley. In a lengthy flashback that makes up the bulk of the story, we find out why.

During a childhood visit to her grandparents, the young Maddie falls and cuts her knee. With his granddaughter wary of him and seemingly inconsolable about the likelihood of having a scarred knee, Ridley starts to comfort her by telling her the stories behind some of his own scars.

The stirring tales of love and war fire the girl’s imagination, and she develops a fairy tale in parallel with her grandad’s memories – a story that eventually evolves into her book, The Many Fantastic Adventures of Scars the Troll.

With a reasonably light touch, Talon and Thompson use this fairly simple structure to address a few interrelated themes guaranteed to tickle the fancy of many a, um, narratophile: how do we use stories to define ourselves, make sense of our lives and forge bonds with others?

The creative pairing don’t reveal how the labour was divided, but the book looks lovely, defined by crisp artwork that captures the characters beautifully with an illustrative flourish, in both the early 20th century of Ridley’s recollections and the fantasy world of Maddie’s imaginings.

However, the parallel narrative technique that characterises most of the book does make it a slightly disjointed read, as if you were trying to watch two shows on different channels by flicking repeatedly between the two.

It’s also very much a book of two halves – or three thirds anyway. It comes as a bit of a shock when you hit the end of the main story on page 96 of the 132-page book. The rest is mostly taken up with the text of one of the adult Madeleine’s published stories, based on the tale unfolded in the core story.

While it allows for some lovely full-page illustrations in a variety of styles by a small army of artists, it doesn’t add much to the emotional wallop at the heart of the book. Together with the fact that quite a few pages in the main story feature smaller tiers of panels in the middle of much larger pages, it gives a sense that inside this big book is a smaller book waiting to burst out.

But it’d be a bit mean-spirited to let that kind of nit-picking detract too much from a book that has such a warm heart and timeless message. Given that Beautiful Scars is targeted at a younger readership, there were two aspects in particular that moved me.

First, it was nice to see the value of age being acknowledged. One of the things that most gets on my thrups (look it up) about the current media environment is the lack of dignity afforded to older people, who are generally there to tee up a gag about smelling of urine.

The boring old fart in the pub, boring everyone with his boring war stories has been a staple in TV drama for as long as I can remember. Talon and Thompson are to be applauded for cracking the surface and highlighting that a life well lived brings with it a wealth of stories that deserve to be shared.

One of my biggest regrets in life is that before he died, while I was in my early 20s, I never sat my dad down and coaxed out of him the real story of his life: what it was like for a simple 17-year-old farm-lad from the remote west of Ireland to pitch up in the bustle of London in the fateful summer of 1939 and to spend the next six years moving around wherever shit needed to be shovelled.

There are snippets: him crying himself to sleep on his 21st birthday, a gentle giant of an altar boy alone in a work camp with hundreds of rough-arsed navvies; not bothering to go the the air raid shelter the first time the sirens went off in Portsmouth – and rapidly changing his mind when the houses around him started to explode; giving his packed lunch to the hungry German POW labourers he was supervising.

It’s probably hard for digital natives to conceive, but there was a time when not every moment and event in our lives was recorded and shared. And in that context, all we had to rely on were stories – the remnants of an oral tradition, handed from person to person. And that’s what Talon and Thompson celebrate here.

The other rewarding aspect of Beautiful Scars is that it doesn’t shy away from the inevitability of death. Although fairy stories end with their characters living happily ever after, real life doesn’t afford that luxury. But while there’s sadness in that – and Maddie’s final tribute to her grandfather is a fitting and deeply moving conclusion to the book – there’s also the sense that a full life lived well, with or without scars, is a cause for celebration.

As always with Archaia, this is a beautifully realised book (the usual props go to designer Scott Newman). Talon and Thompson land their story on just the right side of sentimentality and deliver it with pleasing visual flair. Hurray for stories, and hurray for the people who give them to us.