Two and a half years ago at Broken Frontier we advance-reviewed the first issue of Best of 2000 AD, an upcoming anthology maxiseries designed as a gateway publication into the Galaxy’s Greatest Comic. A carefully curated collection that leant, perhaps, more into the modern era of the comic, it blended accessible complete stories, classic characters, and strips that needed no prior knowledge for the fledgling Thrill-Power enthusiast. And then, as if from the pages of one of its early 1970s serials, the world lurched into the greatest public health crisis of our lifetimes and the project was delayed, before seemingly disappearing altogether. 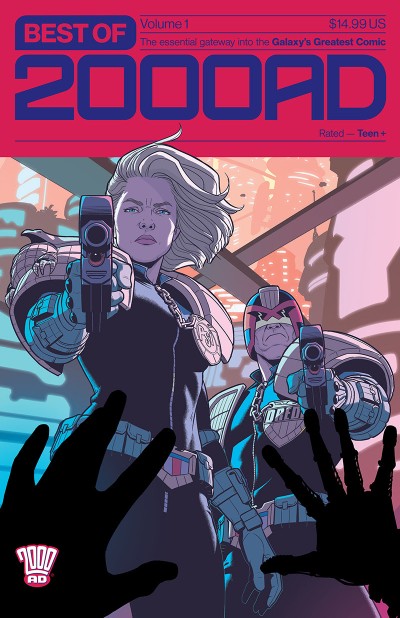 Fast forward to 2022 and Best of 2000 AD has been re-imagined, retooled and repackaged with some elements of that first incarnation still extant but with a broader presentational remit and what appears at this point to be less of a serial approach. It’s a bumper collection, with the best part of 200 pages ensuring readers are not simply getting a taster of classic comics but an impressive and substantial helping of the kinds of genres, names and properties that have made 2000 AD an iconic force in British comics over the last 45 years.

At this point you will have to forgive me if I borrow a little from my previous review of the unpublished original version of this series as there is some crossover between the two iterations. The philosophy of the book is encapsulated in the “mixtape” idea it promotes so firmly on its back cover and it kicks off with a particularly relevant story from the world of Judge Dredd, (“lawman of the future” for the uninitiated). In ‘Mutie Block’ (below) we observe as a group of mutants wishing to begin their lives anew in Mega City One are inducted into the future metropolis’s society with subsequent unsurprising levels of prejudice and bigotry aimed at them. 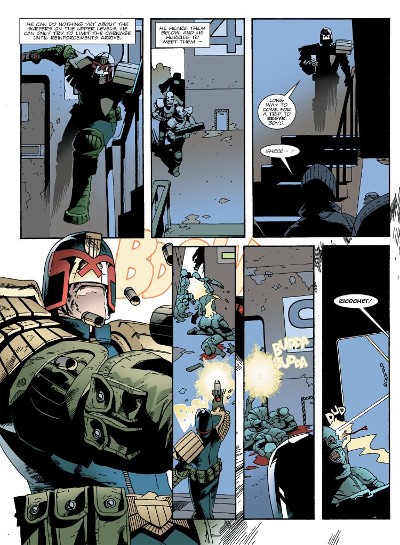 It’s a blistering piece of John Wagner social commentary, including mockumentary narrative elements, with Kev Walker’s deft visual storytelling and pacing painfully capturing the bleak humour of the piece. A most appropriate choice for those new to the world of Dredd given it showcases the strip’s ever present political parody while paralleling the worst excesses of our own developing dystopia, as the “muties” are housed in their own segregated city block and Dredd becomes embroiled in the violent animosity targeting them. A genuine landmark in UK comics, The Ballad of Halo Jones (above) is not simply a classic of 2000 AD or even of British comics; it’s one of Moore’s greatest concepts and for all its critical acclaim still deserves far greater recognition for its brilliant social observation. Set on a 50th century circular housing estate known as the Hoop what marks this strip out is not so much the world-building as the society-building of Halo’s world, with its own customs, language and social structures, all so memorably brought to life by Ian Gibson. A simple shopping trip in this intensely overwhelming locale is the unlikely initial premise for a series that will forever open up questions of what could have been had it reached its planned multi-book conclusion. The entire first book is reprinted here, with the Barbara Nosenzo colours respectfully applied to the original black and white art. Also making the transition between the two versions of Best of 2000 AD #1 is Dan Abnett and INJ Culbard’s atmospheric crime procedural Brink (above), taking place in a universe where humanity has been evacuated to space station environments, Another canny choice given this atmospheric sci-fi thriller brings new readers in at the ground floor without the need to sample a story from a vast continuity of built-upon lore.

No Best of 2000 AD collection would be complete without the artwork of the late, great Carlos Ezquerra and, ‘Sad Story’, a complete Strontium Dog tale written by John Wagner is an inspired choice of entry point to the world of the put-upon mutant bounty hunters Johnny Alpha and Wulf Sternhammer, showcasing not just the grim reality of their existences but also Ezquerra’s great line in violent slapstick and comedic visual characterisation. 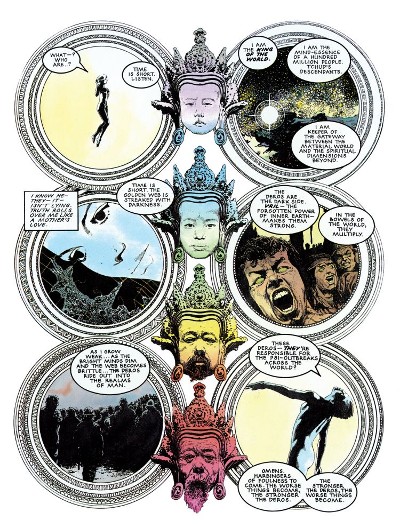 Preceded by a perceptive essay introduction from Adam Karenina Sherif, the entire Judge Anderson story ‘Shamballa’ (above) takes its protagonist (a cop from the Psi-Division of Judge Dredd‘s mythos) on an intense personal journey as she investigates the source of a global phenomenon that has left the world veering on the point of psychic collapse. This much overlooked gem’s inclusion is made all the more poignant by the recent passing of writer Alan Grant, a true creative cornerstone of 2000 AD’s history. Artist Arthur Ranson’s work is understandably much admired but that respect is often reduced to an appreciation of his photo-realistic style. Here his ever inventive page structures and panel layouts add narrative layers to the mystical nuances of Grant’s strip in a remarkably in-tune collaboration. 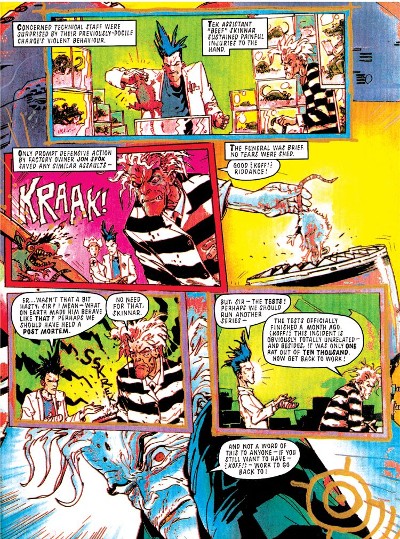 Rounding out the issue are two shorts that I want to call lighter fare but that seems slightly awkward given how dark their comedy factor is. ‘Spock’s Mock Chocs’ (above) by Alan Grant, Brendan McCarthy and Jamie Hewlett is a reminder that bleak humour is as much a part of the success of Judge Dredd as its social commentary and a D.R. & Quinch’s Agony Page one-pager (below) by Jamie Delano, Alan Davis and Mark Farmer introducing new readers to the comic’s favourite interstellar reprobates. 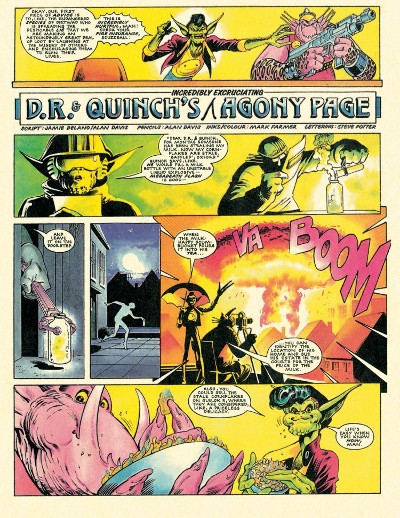 As an introductory package that is both accessible and also a fitting embodiment of the worlds of 2000 AD this is an expertly curated compilation. It also acts as a gateway to Rebellion’s 2000 AD graphic novel range, carefully directing readers to further reading and allowing them to navigate 45 years of zarjaz comics craft with extra confidence and a sense of wonder. And if you’re a longer-term reader then it hardly needs saying that the collection of whole story arcs in Best of 2000 AD #1 is an opportunity to revisit some nostalgic classics with fresh eyes and an appreciation that many new readers will be discovering your old favourites for the very first time!