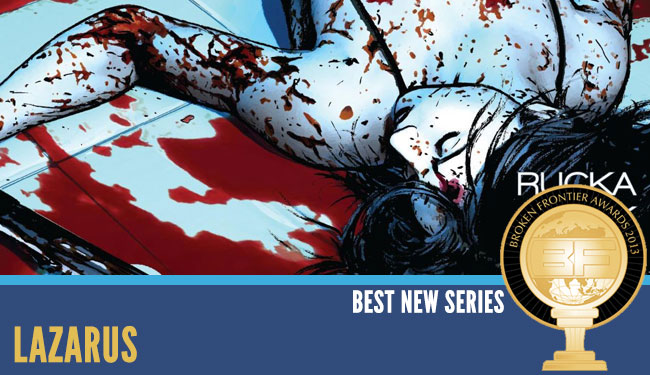 Greg Rucka and Michael Lark are a match made in comic book heaven, but heaven’s a place one can only wish for when you’ve stepped into their captivating dystopian world.

Born out of the current global economic crisis and advancements in genetic modification technology, Lazarus is a sci-fi action thriller that hits home because its subject matter is quite probable, instead of being a far-fetched extrapolation of the ‘humanity vs technology’ thesis.

Premises and hooks aside, there’s no denying that a huge part of what made Lazarus fire on all cylinders right out of the gate last June is that it has two creators at the wheel that are perfectly in sync with one another. Greg Rucka and Michael Lark have been to war side by side before, and Lazarus is the exponent of their desire to work together again since their Gotham Central days.

Lark excels at grounded, realistic stories with a tight, perilous atmosphere, and that’s exactly the world Rucka has created. Lazarus is a sci-fi series devoid of spaceships and androids. It isn’t like I, Robot, where the reality of robots taking over from us is hundreds of years away – if it ever happens. And don’t get started on Star Trek.

Today, we shrug our shoulders when a reactor at a Japanese plant cracks, but we do fear the loss of our welfare and well-being in a world where the rich are getting richer by the second and being middle-class no longer means you’ll be spared of poverty. The fear that a society where the 1% has become the 0.001% in charge and has pushed everyone aside is right around the corner is real. But that’s only half of Lazarus’ realistic premise.

The actual sci-fi twist comes from what might occur when our relentless experimenting with genetic enhancements gets pushed to the extreme and applied to our fellow human beings. If that happens, how human do we remain on the inside?

Five issues in, it’s way too early for Lazarus to have formulated an answer to that question. Rather, we’ve got Rucka’s excellent back matter – one of the finer ones around – where each installment, he shares some of what he’s uncovered in what the world at large still thinks is fringe science. It’s not, and it makes you think hard about what the world of tomorrow might look like if DNA and stem cells have become scientists’ favorite toys. That slight twitch you just felt in your belly? It’s called discomfort.

In Lazarus, the aforementioned techniques are not practiced large-scale; they’re only applied to the ‘lazarus’: bio-tech forces in a human shell that serve as the protectors of their Families, a.k.a. the 0.001% now effectively ruling the globe as governments have lost their reason of being. Forever Carlyle is the lazarus for the immensely powerful Carlyle Family, and while she’s led to believe she’s an actual flesh-and-blood relative of these people, things couldn’t be further from the truth. If she’s not, then who or what is she? 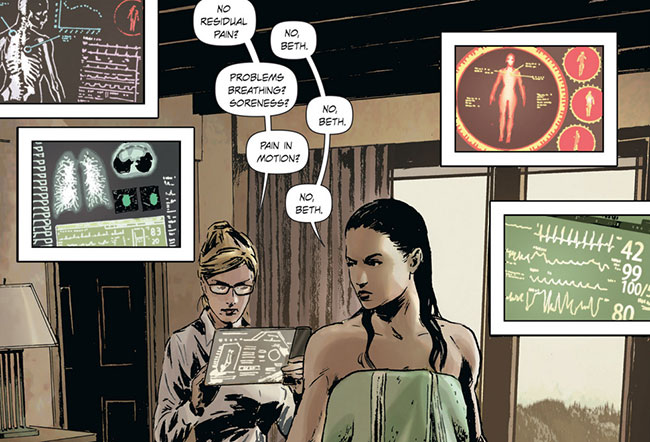 Right from the comic’s opening sequence, you know Forever’s something special, a young woman with unique capabilities and a good heart that’s tasked to do bad things but not allowed to ask any questions afterwards. She’s constantly being goose fed pills and injections to keep functioning as ordered, but much as the Carlyles want her to be, she’s not a human robot.

Forever is looking for her place in the world, which is the very aspect that makes you feel deeply emotionally engaged to her. She’s like us, the added tech is just varnish. Even before her existential journey kicks off in earnest at the end of Lazarus #4, you know that Rucka and Lark have created one of the strongest and layered female leads in recent memory.

Apart from the series being the best dystopian sci-fi currently available, it’s this powerful characterization that forms the beating heart of Lazarus and the very reason why you’ll want to be part of Forever’s journey… forever.