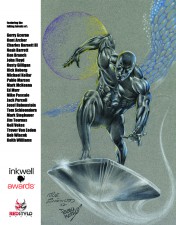 Voting for the 7th annual Inkwell Awards (the “Inkwells”) has ended and the comic book inking advocacy group  will present its live awards ceremony during this summer’s Heroes Con, held June 20-22 in Charlotte, NC, to reveal the highly-anticipated results.

Rather than just “Favorite Inker”, the Inkwells have five categories, including the “Props” award for under-recognized professionals, and the S.P.A.M.I., for favorite Small Press And Mainstream-Independent work. Thousands of voters came to the group’s web site to vote online from May 15-30.

“After another productive year spreading the word about the art form and its vital contribution to the industry, the Inkwell family is thrilled to celebrate with fans the culmination of that time, effort and passion by recognizing the industry’s best ink artists,” said Bob Almond, the non-profit organization’s founder and director. “We’re forever grateful to Heroes Con and their staff for making this mission an annual reality, supporting the community and giving fans an opportunity to learn more about and appreciate this often overlooked part of the business.”

The Inkwells will have several members in attendance at the show, including ambassadors Mark Brooks, Cully Hamner, Mike McKone and J. David Spurlock, contributors Randy Green and Dan Panosian, plus past and present committee members, volunteers and others. The Inkwells also plan to have two models portraying their Ms. Inkwell spokesperson character: Anna White from Massachusetts and Laura Beihl from West Virginia.

“The con attendees enjoy greeting our Ms. Inkwell almost as much as meeting and hearing from the industry professionals who help produce their favorite comics,” Almond added.

The Inkwells will be set up in Artists Alley, offering for donations their new, annual Joe Sinnott Inking Challenge book (#3) and other Inkwells books, color prints, model photo prints, t-shirts and various donated items. Proceeds will help fund continuing operations and philanthropic programs, travel for the award recipients to the live ceremony, trophies, and pursue their ongoing mission.

The awards ceremony is scheduled for Saturday, June 21, at 12:30 PM in room 209/210. Headlining the event is Eisner-winning, Emmy-nominated artist, Bill Sienkiewicz, as the Guest of Honor. Additional speakers include Almond as host, 2012 S.P.A.M.I. Award recipient Dexter Vines as presenter, plus industry mainstays Ron Garney and Steve Saffel as guest speakers. All winners will be announced, as well as the two recipients of the annual Joe Sinnott Hall of Fame Award, which recognizes two artists for a minimum of 25 years of outstanding career achievement.

Almond continued, “Attendees are always anxious to see who gets in to our Hall of Fame and cheer when they’re announced. We can’t wait to celebrate along with them.”

Following the ceremony will be a brief, live auction with signed sketch donations from artists like Shane Davis, Scott Hanna, Tod Allen Smith and Joel Adams, plus the highlight, a Neal Adams Black Canary (donated to the Dave Simons Inkwell Memorial Scholarship Fund).

The Inkwell Awards is an official 501(c)3 non-profit organization whose mission is to educate the public and promote the art form of comic-book inking, as well as annually recognize and award the best ink artists and their work. Now in its seventh year, the organization is overseen by a committee of industry professionals and assisted by various professional ambassadors and numerous contributors. They sponsor the Dave Simons Inkwell Memorial Scholarship Fund for the Kubert School and host the Joe Sinnott Hall of Fame Award.