Given that I first reviewed his small press comics around a decade ago it feels rather strange to be describing the first volume of Birdking, published a couple of months back by Dark Horse Comics, as another breakout step in the continuing emergence of artist CROM. Reuniting him with his Raiders collaborator writer Daniel Freedman, Birdking is the beginning of an epic saga that plays to the illustrator’s established strengths in the fantasy genre. Something that CROM was already noted for when his self-published Golden Campaign was rooting autobio in fantastic visual metaphor all those years ago. The premise of Birdking is based around that old staple of the genre – the quest adventure. In a land made up of multiple kingdoms young Bianca is the apprentice of the eccentric and surly blacksmith Thonir. While her friends are being sent off to war Bianca continues her work at her master’s side. When Thonir is tasked with mending a broken magical weapon it provides Bianca with her first opportunity to see the world outside her village. But things start to go seriously awry when the pair run afoul of the henchmen of Aghul, the ruler of the land. As revelations about Bianca’s destiny come to the fore, she is joined by the silent, enigmatic, and long-dead former king of the land, the Birdking… 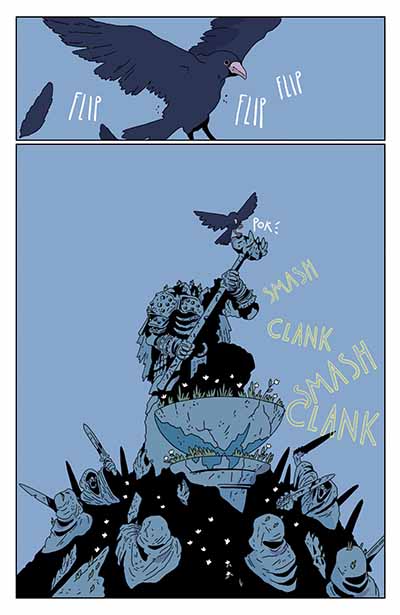 Birdking mixes all the standards of fantasy adventure – enchanted swords, unrealised legacies, warring kingdoms, mystical artefacts – in a first chapter that adeptly balances world-building history with character study. Freedman’s story wisely focuses on characters first, drip-feeding us hints and teasers about the realm they move through so as not to compromise the pacing with undue exposition. Each chapter heading also gives us quotes from historical texts that supplement and expand on the main narrative in carefully controlled increments. 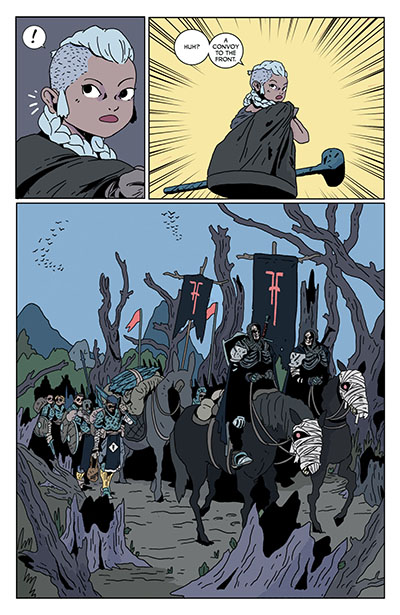 Undoubtedly, though, for most readers it will be CROM’s stunning art that leaps out at them from the book shelves. Birdking allows him to flex his visual storytelling muscles with an impressive line in character design (particularly the titular character) and a variety of environments for the cast to move through. Freedman frequently steps back to allow CROM to indulge in purely illustrative sequences which, again, allow the reader to absorb this world through alternative interpretive skills, reacting to it in a more instinctive than analytical fashion. 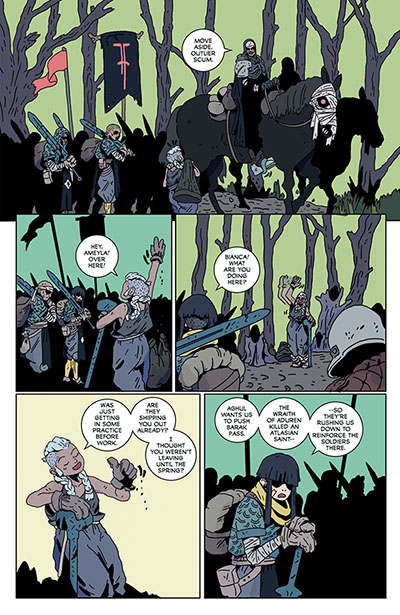 While this opener leaves many questions unanswered it also provides plenty of hooks to keep the reader anticipating the next volume. Fans of the genre will not necessarily find anything groundbreaking here in terms of plot or approach but they will enjoy a solid, escapist piece of comics. And that CROM artwork is worth twice the cover price alone…

An exhibition of original art from the comic is running at JAM Bookshop in East London until December 14th. CROM will be there on December 8th for a special signing event between 6pm and 8pm. More details here.