Julia Gfrörer’s tale of strangeness at sea is a rich and surprisingly touching mix of lyricism, doomed romance and humour.

Welcome back to Broken Frontier – where it’s ALL MERMAIDS, ALL THE TIME!!!

The haunting 72-page tale relates the sorry fate of two sailors – the ailing Xavier and the bolshy, resentful Warren – who are cast adrift from their voyage of discovery after bad weather leaves the crew short of food. Xavier soon succumbs to his illness, and what follows is the strange, ballad-like story of Warren’s lonely drift towards the end. 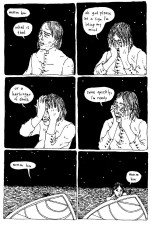 However, his voyage to the Great Beyond is interrupted by the unexpected arrival of a mermaid, who – in a series of unexpectedly touching scenes – nurses him intimately through his final days. With the simple phrase ‘I’ve got you’, the comfort given by the mermaid addresses one of our most basic human needs; it’s intensely moving in its simplicity.

The motivation of the mermaid – Eulalia – remains oblique; she comforts the lost sailor, but also torments him with suggestions that his wife is being unfaithful to him. She declares her love for him, but in another interlude – in which her jaded mermaid pals watch the ship sink, we get the sense that mermaids see human men as little more than potential playthings.

Speaking of which: the appearance of the other mermaids highlights what could be a bit of a flaw in this book. Maybe as a result of its episodic online publication, there’s a bit of tonal inconsistency between the touching fatalism of Warren and Eulalia’s ‘romance’ and the apparent social satire of its treatment of the hipster mermaids. 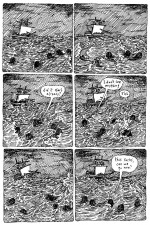 However, despite that, the book is woven together perfectly by Gfrörer’s distinctive artistic style. Her scratchy, baroque rendering gives the book a palpable atmosphere in which the incursion of the supernatural seems totally fitting; its apparent delicacy belies its dark power. You feel confident in the hands of a storyteller who seems very much at home with love and death.

She also has a very distinctive narrative style, using regular panels and repeated viewpoints to create an almost musical rhythm, fitting the borrowed title – from the much covered folk song Black is the Color (Of My True Love’s Hair) – and reinforcing the tone of the story as something akin to a sailor’s ballad. She depicts powerfully the torturously slow passage of time for the castaway Warren and the total isolation of his tiny boat in the seemingly boundless ocean.

I’d somehow missed Julia Gfrörer up to now, but there’s something pleasingly pagan about her work that suits these long winter nights* – something rich, dangerous, seductive and magical.