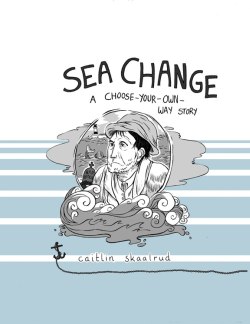 ‘Stories from the St. Louis’ is the banner tagline under which Caitlin Skaalrud has grouped all of the self-published work I’ve read from her to date, including the nostalgically structured Sea Change: A Choose-Your-Own-Way Story. It’s a distinctly adult twist on those Choose Your Own Adventure books or the Fighting Fantasy series that you may have read as a kid. While I’m sure someone must have appropriated the format for comics since 2000 AD’s Dice Man series in the 1980s, Skaalrud’s take has a distinctively downbeat and haunting playfulness to it not evident in its precursors; whichever way you opt to push the narrative there’s something profoundly fatalistic about the paths on offer…

The story begins with a lonely fisherman discovering the dead body of his dog and only companion. A maudlin opening from which the reader is then invited to steer the course of this old man’s destiny via choices given at the end of each segment (“To go to work today turn to page 5. To stay home turn to page 7” and so on). There’s a sense of weary resignation to the outcomes, often violent or pessimistic, that forms an interesting and deliberate undermining of a process of storytelling first designed to give children the illusion of successfully manipulating the text and becoming the hero of the piece.

What’s fascinated me so far with Skaalrud’s ‘Stories from the St. Louis’ is the way she juxtaposes the mundane and the everyday with the fantastic and the eerie. That’s very much on show here with the routine and the bizarre placed side by side in the core plot concerning the fisherman’s encounter on one of his isolated trips out to sea with an understandably embittered mermaid. Through the interweaving pages of Sea Change’s multiple choice plot twists the reader will eventually understand the significance of our protagonist’s guilt in his dealings with this ocean dweller and its link to an act of brutality in his childhood; one that is then poetically reflected in the various fates that can be played out for him via the audience’s selections. 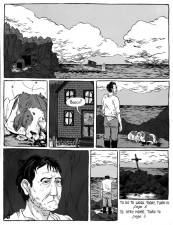 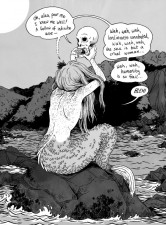 Skaalrud’s grey tones accentuate the oppressive and gloomy atmosphere of her story to sombre effect. I was also particularly impressed throughout by her visual characterisation which is keenly observed, from the look of tired acceptance always visible on the worn face of the fisherman, the angry defiance of the mermaid he captures or the sly knowingness of the Native American woman the fisherman visits in one scene. There’s a lingering sense of inevitability to the proceedings here which is made all the more evocative by Skaalrud’s moodily suggestive layouts.

Sea Change is an excellent introduction to the work of Caitlin Skaalrud and the tone of her ‘Stories from the St. Louis’ books. Experimental and intriguing material from a creator to watch in the future…

Sea Change is published by Talk Weird Press and is available here priced $10.00.