If you remember my staff pick on Polar: Came From The Cold from a few months back, you know I’m quite a fan of Victor Santos’ artwork. This week, the artist is pairing again with his Mice Templar cohort Bryan JL Glass on Furious, a new superhero series from Dark Horse.

Make no mistake, this book isn’t part of the classic hero revival underway at the publisher featuring Captain Midnight, Skyman and others. On the contrary, all parties involved can’t underscore enough how different it is from the average genre fare.

Furious is a tale of redemption and the balancing act a young woman faces trying to avoid the pitfalls of celebrity and fame. It’s also about that woman coping with a serious temperament that’s hotwired her brain both in real life and while performing heroics. When her grey matter goes boom, it ain’t pretty. Except it is, because Victor Santos is drawing it. 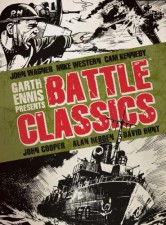 Curated by Garth Ennis, Battle Classics collects the last of the best of the famous war stories magazine.

H.M.S. Nightshade by John Wagner and Mike Western tells the story of the Royal Navy Corvette K70 and its crew in WWII, battling the nazis in the frozen wastes of the arctic where your skin freezes off if you leave it uncovered and the icy water can kill you in two seconds flat. Alan Hebden and John Cooper’s The General Dies At Dawn is a gloomy story told from the perspective of a german general awaiting his execution. Each episode counts down another hour of the general’s life while he recounts his story to his jailer.

So get your war on with these classic tales from the heyday of war stories from Battle!

There weren’t many “best of 2013” lists that didn’t include Saga – including the Broken Frontier Awards, where the title won Best Ongoing Series and Fiona Staples won Best Artist (Independent). The book’s mixture of space opera and family complications has made it the defining title of the past couple of years, epitomising the move of creator-owned comics in general and Image Comics in particular to the heart of a lot of readers’ pull-lists.

After the shocking conclusion of #17, the solicitation text for #18 hasn’t given much away, simply stating that “Our heroes’ stay on Quietus reaches its inevitable conclusion.” Add to that a cover image of Lying/Truth Cat with something that probably isn’t tomato ketchup on her chin, and you’ve got the promise of a dramatic end to the book’s third arc. Brian K Vaughan and Fiona Staples haven’t made too many false steps in the past couple of years – but can they land this one?

Accidents happen, right? But an accident only becomes an assassination when it is orchestrated and Mike Fallon is the best accident man in the business!

Written by the legendary Pat Mills with Tony Skinner, Accident Man is a brutal tale of violence, sex and betrayal featuring a boisterous James Bond who goes on a rampage after the murder of his Greenpeace activist wife. Pat Mills and subtext, sometimes it’s subtle and sometimes it is not, this time it’s not. So enjoy the highlife and 1001 ways to cleverly accidentally murder people in Accident Man.

One bit of news that went under the radar during the myriad of announcements at Image’s recent Expo was the upgrade for The Saviors from miniseries to ongoing. The Saviors joins Five Ghosts and Peter Panzerfaust as the most recent Image series to make the leap and is a sure sign of the company’s faith in the title.

And why shouldn’t they have faith in the title? James Robinson and J. Bone are a terrific pairing. Robinson writes the book with a down-to-earth humanity while J. Bone draws the heck out of the invading aliens. Issue 2 promises even more action and intrigue as Tomas deals with life on the run following his discovery of the existence of these aliens.

Judge Dredd 3D starring Karl Urban didn’t do well at the box office when it was released in September 2012. What happened next was a filmmaker’s dream come true—it became a cult hit upon its release to DVD.

Fans of the film are treated to a sequel in comic book form this week with the debut of Judge Dredd: Underbelly Movie Sequel One Shot. The criminal gangs of Mega-City One are moving quickly to fill the power void created by Ma-Ma’s death as well as the gap in the market left by the Slo-Mo drug. When the bodies found in a rad-pit are revealed to be mutants, suspicion mounts that an outfit has begun smuggling illegal refugees into the city from the Cursed Earth. Judge Dredd teams with Psi-Judge Anderson to scour the underworld for those responsible and bring them to justice.

Half Past Danger HC

This hardcover collects all six issues of IDW’s titular pulp-inspired adventure miniseries, pitting an American Marine against a ferocious assortment of prehistoric predators. At the height of World War Two, Staff Sergeant Tommy “Irish” Flynn is caught between Nazis and dinosaurs on a remote South Pacific island. Action of the highest caliber predictably ensues.

With Half Past Danger, Stephen Mooney, formerly an artist specializing in TV adaptations, has established himself as a double-threat creator in his own right. If you missed this mini the first time around, now is the perfect time to pick up this collection. 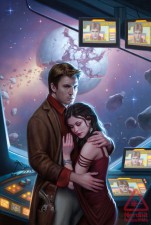 Serenity: Leaves on the Wind #1

The Firefly franchise lives again! After a handful of prequel and midquel comics following up on the television and film, the crew of the Serenity finally continue their story here. Scripted by geek royalty Zack Whedon, the miniseries promises to deal with the consequences of Wash’s death, and of the crew’s embarrassing exposé of the Alliance’s crimes,

With Zoe well along in her pregnancy, and Alliance goons hot on our heroes’ tail, the stakes have never been higher for Malcolm and his crew. If you’ve been waiting for a worthy follow-up to Serenity, it’s here now!