Caliber Comics, one of the leading independent comic companies of the 90’s, announced its return to publishing in February of this year.  Now they are announcing their schedule for the summer of 2014.

Caliber will be releasing only graphic novels initially with no timetable on releasing monthly periodicals. Shipping in July will be two graphic novels.  “Talismen” is a full color young adult graphic novel about a modern day soldier finding himself waking up in a fantasy land and tabbed as a returning hero.  From creators Steve Jones and Barb Jacobs.  Wayne Vansant, the noted historical artist for books such as The Civil War series from Heritage and Days of Darkness, tells the tales of the Waffen SS in “Knights of the Skull” which will be released in black and white. 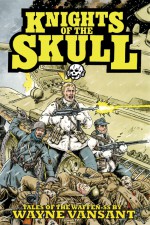 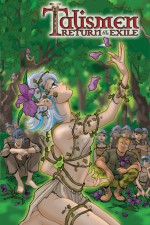 For August, again Caliber will release two books.  The first will be a new printing of “The Rocky Horror Picture Show” comic collection.  Adapted by Kevin Vanhook, Kevin has also gone through the pages and made some adjustments, primarily in the coloring of the pages.  In addition to a new cover and some guest pinup pages, the section on the audience participation guide will be replaced with a look at Rocky Horror and what went into the comic production.  Also in August will be another full color graphic novel, “Carbon”.  From writer Danny Boyd and artist Edi Guedes, Carbon is an ecological adventure tale based on the turmoil of coal extraction in West Virginia.  Film director John Sayles provides the introduction.

September will see an original mystery in graphic novel format, “Storyville: The Prostitute Murders”.  Set in early 1900 New Orleans, Storyville was the legalized red light district.  In this tale, written by Gary Reed and illustrated by Wayne Reid, someone is killing the prostitutes and their clients and the lead detective is forced to work with a doctor specialized in psychotherapy in an attempt to figure out the motive for the murders.  Also by Reed is “Subversives: Tales of Rebels, Spies, Schemers and Other Acts of Misdeeds”.  Reed explores brief glimpses into the lives of the famous and infamous in this survey of traitors and subversives throughout history.   Some exploits are well known, or believed to be and of course, there are always a number of surprises. Also in September is “Disciples: The New Magic”, a full color graphic novel collecting the Image series featuring art from Laurence Campbell, artist on Mike Mignola’s B.R.P.D. and Deadpool, Punisher, and Wolverine for Marvel.  Written by Chris Dows and Colin Clayton, Disciples are a misfit group of seers, magicians, and wielders of the Black Arts whose own internal politics pose as great a threat to their survival as any outside influence.

Publisher Gary Reed said all the books are in the final stages of production and all but one have the complete art finished.  “These books will ship on time,” said Reed.  He added that there will be other books printed but most of them are collections of previously published material which will probably not be carried by Diamond Distributors.

Reed said that since Caliber first announced its return, most of the effort has been to bring the Caliber library into digital format for all the various formats.  “From Transfuzion (Reed’s former publishing company that rolled into Caliber), we had some 45 graphic novels which not only have to be converted to Caliber titles but also digitized for the formats.  Plus, we’ve picked up a number of other titles, both previously published and new material.”  Reed also said that the digital formatting was nearly complete.  As for new titles, Reed said that there will be likely a short delay releasing to digital after the print version, especially for any titles that go through Diamond Comics,  but no specific time frame has been set as of yet.

Caliber was one of the leading independent comic companies in the 1990s. Caliber stopped publishing in 2000 but their relaunch was announced in February 2014.  Caliber took over all publishing operations of Transfuzion Publishing and have over 50 graphic novels in print and in digital format.