A supernatural horror story intertwined with environmental issues so timely they appear to come from the day’s headlines, just barely scratches the surface of Carbon, the all new graphic novel from Daniel Boyd, and to be released by Caliber Comics nationally in August of 2014.  The book will be available in comic shops via Diamond Distributors, Order #JUN141016 and retails for $19.99.

Set in the southern West Virginia coalfields, Carbon tells the story of what happens when an evil coal operator unwittingly awakens and releases a cursed and banished underground civilization onto the surface.  The only two things that stand in the way of the end of the world are a disgraced, ex-pro baseball pitcher and a community of courageous coal miners.

“Carbon is the main reason I got into graphic narrative. It is a story I’ve wanted to tell for well over 10 years. When thinking about coal issues, it all sprang from the realization that we’re all carbon. Plants, animals, and we humans, are the ingredients of this fossil fuel. What if you put the process in reverse?” said Boyd, who during that time has transitioned from a successful movie-making career into creating award-winning graphic novels. “Coal is the epicenter of climate change and Carbon’s setting, West Virginia, is the epicenter of coal.” 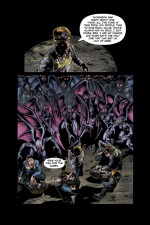 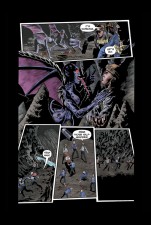 Boyd dedicated Carbon to “those that toil in darkness – coal miners” and said that whatever side of the debate over the industry you fall on, miners are the often unseen heroes. Boyd, a West Virginia State University Assistant Professor of Communications, has produced documentaries and feature films before shifting his focus to graphic novels with Chillers and now, Carbon.

Brazilian artist Edi Guedes  provided artwork with Alzir Alves doing the coloring on this full color original graphic novel.  Guedes worked with Boyd on Chillers, and has also illustrated such comics as The Daughters of Merlin and Agencies Frontiers.

Carbon features an introduction by well-known filmmaker John Sayles (Lone Star, Matewan, Eight Men Out,) describing the graphic novel as “an ambitious addition to the long tradition, religious and secular, of that basic cautionary tale – be careful what you dig up.”

Although Carbon will be released nationally in August, there have been a few limited book signings in special campaigns to bring awareness to the coal situation in West Virginia. Caliber Publisher, Gary Reed said, “Danny’s getting this book out to the general public at festivals and seminars for people who are concerned about the plight of coal mining. We think the interest generated there can only help bring awareness in the comics market.”