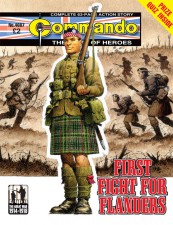 Commando No 4687 – First Fight For Flanders

On the morning of the 28 June 1914 two pistol shots fired in a Sarajevo street would plunge the world into the most destructive war it had ever known as a spider’s web of alliances set Great Power against Great Power.

By the time Private Hugh MacPherson got to France, the first trenches were scarring the landscape, heralding the static, deadly warfare to come. But Hugh had another concern…his officer. The man he believed had blinded his brother.

A reckoning was coming. 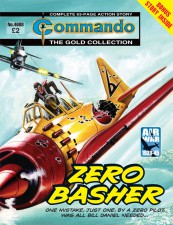 Young Bill Daniel was a fine Hurricane pilot. He welcomed his posting to Burma and the chance to shoot it out with Jap Zeros high over the jungles. But it wasn’t to be as simple as that. Soon after he took off with Mike Bell, his squadron leader, Bill found out why 1066 squadron was known throughout the RAF as “Suicide Squadron”…

Cool, calculating characters have found homes in Commando stories since the very earliest issues were published. Sometimes on the side of the angels, sometimes not. In this instance the cool, calculating Squadron Leader is definitely on the side of…no, find out for yourself! Read the book.

That’s once you’ve got beyond Ken Barr’s accomplished full colour cover, for there’s a lot to admire in Snr Ortiz’s black and white work. He didn’t do a great number of Commandos (we reckon 19), but he was in at the start with No 5 and finished with Feb 78’s No 1202 — a good run by anyone’s standards. 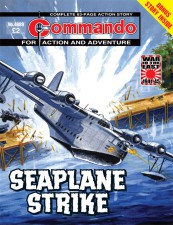 With only three working engines and weighed down by a rescued Allied submarine crew, the RAF Sunderland flying boat was stuck at sea level in the waterways of the Burmese chaungs. Hunted by a relentless Japanese officer, the aircraft’s crew had to find a way home — they had vital information of a massive Japanese force waiting for a break in the monsoon…waiting to obliterate the Allies.

Pilot “Lofty” Crane planned to show the Japs that they couldn’t keep good men — or a good plane — down. 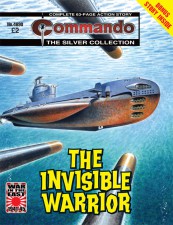 Commando No 4690 – The Invisible Warrior

When four Allied submarines were lost without trace in the same area of the Indian Ocean, the Top Brass believed it was the work of a new Japanese weapon, code-named Namurani.

The remaining sub crews knew different – the area was jinxed!

Lieutenant Dan Baxter, commanding the submarine HMS Bluefin, didn’t know what to believe until he learned the story of the legendary Japanese Samurai Warlord, Tichibu, and his Spirit bodyguard, Namurani –

Argentinian artist Jose Maria Jorge was well-known for his stunning aeroplane illustrations –  but we can see from this story that he was every bit as good at drawing nautical tales. Jorge’s first published Commando was ‘Flying Fury’ (No 384) in February 1969. He illustrated Commando books for over forty years – including the 4000th issue, “Aces All!”, in April 2007 – right up to September 2010’s ‘Divided Aces’ (No 4329), published shortly before his death. A unique talent, much missed, but luckily we can still enjoy his extraordinary work.