Like all good storytellers, Ryan Burton knows that to hook his audience from the get-go, it’s best to start the story in the middle. There is no quicker way to immerse your readers in the world you’ve shed blood, sweat, and tears creating than to drop them in straight away.

In Dark Engine, his new series from Image Comics, Burton and artistic collaborator John Bivens have set about building a vast new mythology that transcends time and space.

Chronicling the creation of the world’s saviour – and potential destroyer – as embodied in the person of the newborn warrior Sym, this is a series that pulls no punches as it lays the groundwork for a time-spanning adventure that will disturb, electrify, and gross you out in equal measure.

Featuring kinetic, visceral artwork and a plot full of intrigue and competing agendas, Dark Engine certainly depicts a world the modern comic book fan will have no trouble escaping to. This is speculative fiction at its darkest and most fantastic.

With the second issue ready to hit shelves on August 20, Mr. Burton agreed to shed a bit more light on what makes this particular dark engine tick.

First of all, congratulations on your Image First for the debut issue of Dark Engine. What has it been like working with a publisher of Image’s ever-increasing stature and acclaim? Why are they still the go-to publisher for new creators? 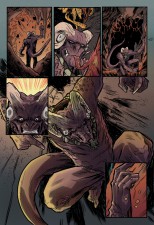 Working with Image? God in heaven, it’s surreal. I come from a place where I was snagging copies of WildCATs off the spinner racks at 7/11 in El Paso, Texas, while playing Street Fighter II with all my pals. So to think that a story I helped create is now being published by the very same company that I’ve been so fond of since childhood…yeah, it’s surreal.

It’s like they’re constantly flying close to the sun, always reaching new heights. No one book in their impressive library is like another, and with the quality and care they put into their titles, it just feels right to show them the stories I want to tell.

There appears to be a vast mythology at work in Dark Engine. What were some of the challenges of working with such an intricate back story? What are some of the benefits?

The biggest challenge is not to give away too much too quickly. In the first arc, John and I have started in the middle of the story, giving hints here and there, slowly introducing the readers to the characters and creatures that inhabit the world of Dark Engine. The second arc will deal with how the world came to be so dark and hopeless – you could say it’s the beginning of the story.

There’s so much I want to tell, but it’s important to me that we let things breathe, that we give them proper time in the sun. The benefit is the sheer joy of playing the tour guide; introducing the reader to the strange world we’ve built.

Between the Sporedevils and the Alchemists, there seem to be competing players seeking to control Sym and her singular talents. Who should we be rooting for? 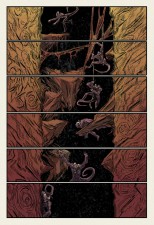 I don’t quite know if there’s anyone we should be rooting for. Everyone has their own agenda for why they want to either find Sym or control her. The players in this story all have an agenda – agendas that are born from desperation, the kind that will never be trustworthy or altruistic.

That being said, the person you’re rooting for in one issue may turn out to be your most loathsome, hated character by the end of the next issue.

Dark Engine feels like it could be traced back to a number of different genres. What were some of your inspirations or influences when building Sym’s world?

The Dark Engine itself seems like a biological time machine of some kind. Would this be an accurate assessment of the device? What other abilities does it afford Sym?

You’re spot on. It’s a living engine, full of thought and curiosity. Aside from sporadic time-traveling abilities, it only has one other purpose—a destiny—that’s revealed in issue four, which is the last issue in the first arc.

This isn’t a series for the faint of heart. Violence and copious amounts of blood and viscera seem to be a staple of Sym’s world. What makes her so perfectly suited to the environment(s) she finds herself born into? 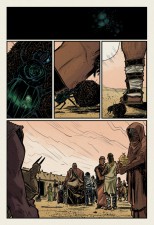 Issue one dealt with quite a bit of violence, because that’s the world she was born into; and really, that’s what she was created to do. She was born from alchemy; with that comes an inhuman lack of empathy. That, along with her preternatural ability to adapt to severe conditions and her excellent fighting abilities, allows her to cope with the harsh environments she finds herself in.

In the first issue, Sym seems like a bit of a cypher. Most of what we learn about her comes from the supporting cast. How will Sym’s character grow throughout the series?

Each encounter will change her. Each encounter will challenge her, rewire her a bit. In issue one, she was a spear thrown across time. She destroyed a
pod of dinosaurs, but in the middle of that destruction, the dark engine suddenly reacted and sent her forward in time to ancient Egypt. There, she’ll be seen differently, and she’ll react differently. With each new experience, we’ll see her develop and grow; and she will no longer be a spear thrown across time, but something else entirely.

This series has a very distinctive visual tone thanks to artist John Bivens. How did you two hook up and what makes John such a great match for Dark Engine? 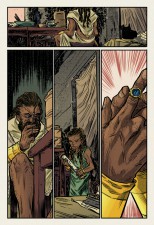 John’s brilliant, right? Wait until you see Kelly Fitzpatrick’s colors over John’s lines. There’s a bit in issue #2 where Kelly decides to use green as the main light source, and the visuals just pop off the page.

John and I actually met about five years ago on one of Ellis’s message boards. Since then, we’ve been in touch; one day, I sent him three pitches, and he went with the one he liked. Our tastes are similar, and we’re both fans of the genre.

It’s incredible how John’s able to capture not just the organic, oppressive atmosphere of the world, but also the internal struggles each of the characters are going through. It really speaks to his talent when you see him ease between loud, boisterous fight scenes, and quiet, reflective moments.

With the second issue about to drop, are there any tidbits you would like to share with readers? What can we expect as the series progresses?

Issue #2 is quieter than the first issue. There’s also a bestiary lesson, wherein we find out how the sporedevil attacks its prey. As the series progresses, readers will come to discover how Sym was born, just exactly what the dark engine is. Soon, we’ll take away the ash and monsters, and we’ll show how the world came to be destroyed.

Dark Engine #2, by Ryan Burton and John Bivens, is published on August 20 by Image Comics.