McNaught has a canny knack for finding something compelling in the humdrum and the monotonous; of imbuing each tiny moment with a flowing, rhythmical splendour of its own. 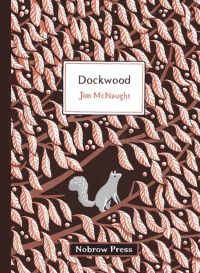 Jon McNaught is a creator with a particular aptitude for uncovering beauty in the ordinary. His debut graphic novel Birchfield Close was a striking work that took the mundanity of suburbia and crafted something magical from it. In his Pebble Island, McNaught’s pensive memoir of remote island life, the readership was immersed in the gentle tranquillity of childhood, reminded of those neverending juvenile days when our awareness of time was distorted by our youthful sensitivities; when a year seemed like a lifetime and a single evening’s play held endless possibilities for adventure. It was a book that lent nostalgia to a frame of perceptual reference rather than to the ephemeral realities of pop culture, and was all the more evocative for it.

His most recent offering Dockwood is set in a small South East English town, and follows a similar narrative structure to his previous Nobrow books. The first of the two stories presented here is “Elmview” which looks at Mark, a young care assistant in a nursing home, as he journeys through a normal working day. Whether it’s observing Mark as he embarks on the daily routine of his familiar chores or as he spends a moment of gentle reflection with one of his elderly charges, McNaught has a canny knack for finding something compelling in the humdrum and the monotonous; of imbuing each tiny moment with a flowing, rhythmical splendour of its own. There’s a kind of lyrical melancholy to the construction of his pages here, with the seasonal autumnal atmosphere echoing the advancing years of Elmview’s residents. 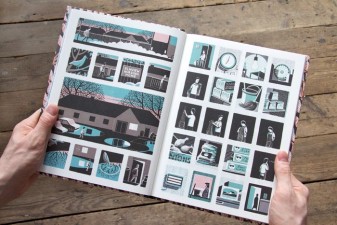 The second tale “Sunset Ridge” centres on Jake and Ryan, two schoolboys, on an evening paper round. It’s a delightfully understated piece that further showcases McNaught’s ability to take smaller, isolated experiences and turn them into a greater whole. It also pursues that by now familiar theme of the wonder of childhood, where checking out a notorious piece of squirrel roadkill becomes an unmissable social event, and that time immersing yourself in the latest video game is the essential highlight of the day. 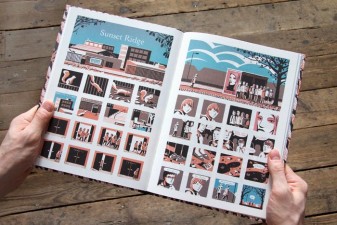 Each page of Dockwood is assembled with unwavering precision but despite this ultra-methodical approach McNaught never loses sight of the intrinsic humanity that is such a vital part of his work. Those tight and carefully congregated panel layouts prove adept at bringing the audience into the moment by focusing on each aspect of an individual scene from different perspectives, and the subdued colour palette adds subtle extra layers to the book’s tone.

There’s a reason McNaught became the first British creator to win the Best Newcomer award at Angouleme this year, and Dockwood is a perfect entry point for any reader wanting to investigate his work further. The debt of thanks we all owe Nobrow Press is made all the more pressing for his inclusion amongst their ranks of published talent.