The superhero team known as the Earth/Galactic Operatives – the eponymous EGOs – has been disbanded for many years. But in a future where faster-than-light travel is an everyday reality, villains of the interstellar sort can show up at a moment’s notice. Most recently, one of the EGOs’ most formidable opponents has returned: Masse, the Living Galaxy. It’s now up to Deuce and Pixel, a married couple who once headed up the team, to get the band back together to say the universe one more time.

Stuart Moore, who readers may know from The 99 and a handful of one-off projects for both Marvel and DC, delivers a consistently paced and well-written script. In just the first handful of scenes, Moore manages to introduce many of the book’s main characters, and even the scientific principles behind much of this world’s technology, all while weaving the comic’s premise and backstory in and out of the dialogue without ever veering into info dump territory.

Gus Storms’ art is hard to classify, both in terms of quality and style. The composition is strong and never cluttered or muddied, but Storms is also light on detail for much of the book, especially when it comes to the characters’ facial features. That doesn’t always work against the quality of EGOs, but it sometimes results in an odd tension between the art and the dialogue; two characters may be in the midst of a heated exchange, but their faces may wear a serene expression at odds with their words. 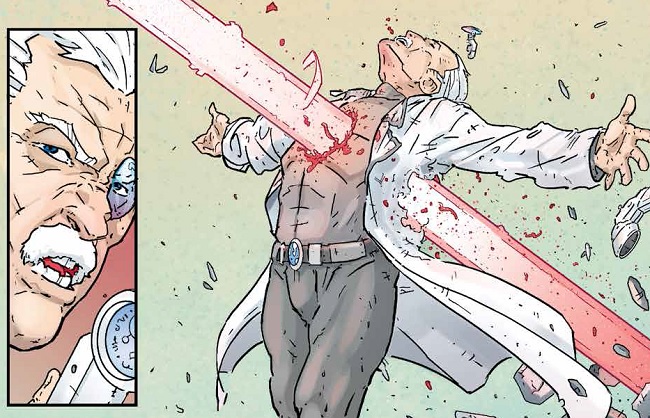 That’s not to say that Storms’ art is bad – it isn’t, and in fact at times it conveys an almost Frank Miller-esque feel. It is, however, the kind of art typically associated with books of a less sci-fi, less action-oriented persuasion. While the scarcity of details sometimes makes for an odd moment like the one described above, it just as often helps keep the reader from getting too bogged down in the futuristic setting, allowing the story and characters to shine through the veneer of not-quite-hard-SF. For some readers, this may be distracting, but for just as many (or more) it will surely be a welcome change of pace.

In short, EGOs is exactly what it sounds like – a sci-fi/superhero mash-up that would feel as much at home in the pages of a Big Two comic as it does as an indie production. While the art occasionally feels at odds with the characters’ verbal demeanor or with traditional genre expectations, a perfectly executed example of world-building makes this a solid first issue, well worth checking out for any science fiction fan.