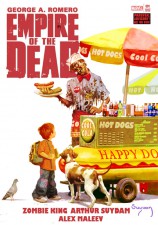 Veteran film maker GEORGE ROMERO single-handedly helped kick-start the zombie genre back in the 1960s and during his tenure at Marvel he has teamed up with modern day monster maestro, Zombie King ARTHUR SUYDAM for a classic meeting of old and new on the Marvel Comics Empire of the Dead series.

Empire of the Dead #2 is scheduled for release February 26, 2014 and all the spectacular variant covers will be done by award winning Zombie King Arthur Suydam, with script by George A. Romero (Night of the Living Dead, Dawn of the Dead, The Crazies, Creepshow) and interior art by Alex Maleev (Daredevil, Spider-Woman, , Moon Knight, Scarlet).

Something is rotten in the big apple. And it’s not just the rotten flesh of the Zombies overrunning Manhattan! Deep in the pit of the bloody Circus Maximus – the undead battle for the amusement of the living. But not all here is as it seems. Amid the fury of the arena, vampires roam New York City, hiding in plain sight! What menacing secrets lie in the dark corners of the once bustling metropolis? And when the zombies and vampires prowl – where does that leave the humans?

Find out in GEORGE ROMERO’S EMPIRE OF THE DEAD #2!