A designer by trade, Tom Muller’s comics journey started when he became webmaster and designer of the website of his local comic shop back in Belgium. Many years later, he’s a renowned craftsman whose credits include everything from Samsung to The Wolf Of Wall Street as the front man of his own design agency based on London, hellomuller.

In Muller’s universe, comics are a labor of love amid projects that get much more visibility than most of what’s coming out of our sequential medium does. In comics, he’s worked on books like Trillium for DC/Vertigo and Viking, Zero, and most recently Noah, for Image. It’s on these books that his imagination can run free, and he deliberately tries to break comic book design conventions whenever the other creators allow. 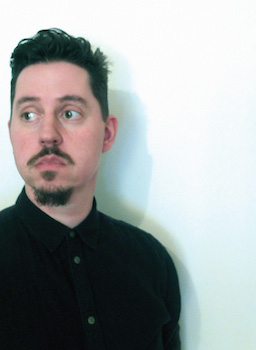 BROKEN FRONTIER: How did you get into designing comics?

TOM MULLER: I think what kicked off everything was the website I designed for my local comic shop back in Antwerp — Mekanik Strip. I was responsible for the upkeep of the site for a few years and had a section on the site where I’d feature artist sites I thought were interesting, one of them being Ashley Wood’s site.

I emailed Ashley on a whim to let him know. He liked my work, we started talking, and I ended up redesigning his site, which led to us collaborating on a bunch of things. That’s how I got my foot in the door so to speak.

It’s great to see designers as yourself getting more recognition and being openly credited for your work. That was not always the case. Do you consider the maturation of the medium as the primary reason for this?

Maybe, I can’t say for sure. One thing is that the proliferation of social media is making everyone a lot more visible online — including designers working in comics. I’ve been very lucky to have worked on very interesting books and series, and try to leverage my profile online to make as much noise about it as possible, so speaking just for myself, I can see why it looks like designers in comics seem a lot more visible.

In the creator-owned arena it’s easy enough to get a credit for your design work, but its nice to see the Big Two slowly take notice and credit designers in their books. I’d like to think that the industry is slowly realising that the designer, just like the colour artists and letterers are an integral part of the creative team that define how a reader experiences the story.

It’s like this for the other creative team members, so I’m sure it’s quite different for a designer too, being involved in a creator-owned project as opposed to work-for-hire design jobs. What are the main differences in the design process working on books like Zero and Noah vs Trillium?

The main difference obviously would be creative control. When working on creator-owned books like Zero or Viking I’m very much involved from the start – before the pencils have hit paper – and together we develop the look and feel of a book.

Even with Noah, which was already being published in Europe I was offered a blank slate, and I worked closely with Darren Aronofsky, Ari Handel and Niko Henrichon on the development of the design — taking into account the fact that there’s some sort of connection with the film and all the other factors that come to see with working on a property like that.

Trillium, even though its Jeff Lemire’s book, is part of DC’s Vertigo lineup and as such falls under the work-for-hire umbrella where I supply a logo design (usually a very quick turnaround) that has to a) fit the book and b) fit the larger publishing agenda of DC.

Similar to the other logos I’ve designed for DC or Marvel, it’s a very straightforward situation of being commissioned to design a logo by their art directors and deliver a design — which then gets applied to the covers in-house.

What do you consider the traits of a great (comic book) designer?

I think the best designers (regardless of working in comics or not) are the ones that have a strong creative voice, but don’t let that interfere with what the client needs.

How do you match design with story? Is there a lot of back and forth between the other creators and yourself? Do you read the script and/or look at the artwork while the various other creative processes are still ongoing or do you mostly come in after all is said and done?

When I’m working on a creator-owned property there’s always a constant dialogue between the creator(s) and myself on what direction we want to go in, what suits the book best and how we can integrate all elements. I started talking with Ales on Zero months before the first issue was solicited, sketching, making prototypes, etc.

The same thing happened on Viking with Ivan Brandon and Nic Klein, my work on Mam Tor Publishing, the things I designed for Ashley Wood… Without doing that you can’t really expect to design something that works. Even when working on logos for DC Comics, there’s a project brief and dialogue on what’s required and why.

Is ‘timelessness’ something you strive for in your work? There seems to be little material in your portfolio that has a clear 90s or 2000s stamp on it.

It is. I really believe that — especially working on logos and publication design — the design needs to stand the test of time; which is important when you’re talking about the shelf life of books. I’m sure it also has to do with my own design influences and mentality towards my work within the larger field of design that its more important to devise a solution that communicates first, rather than to slavishly follow trends. 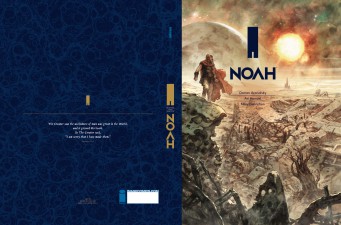 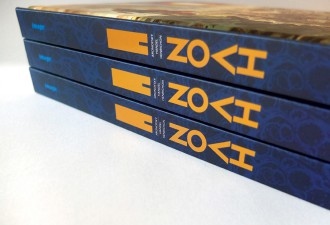 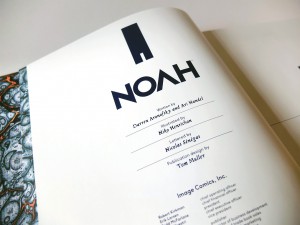 You were a big comics fan growing up. Have your reading habits shifted much over the years?

Obviously they have. I was lucky to be exposed to a wide variety of comics when growing up, ranging from everything that’s available in Europe, to US comics and Japanese manga.

Nowadays I read much less superhero material and am more interested in small independent work, veering into art projects; and in general I’ve come to appreciate comics that I was too young to properly understand the first time around.

I’m appreciating the early Vertigo stuff a lot more now, Moore’s run on Swamp Thing, Sandman, etc. Just delved back into the first Invisibles story arc. And Rick Veitch’s work (Brat Pack, Abraxas, Maximortal) was something that passed me by when I was younger as well.

As you said, you used to frequent the famous Mekanik store in Antwerp while living in Belgium. Do you have a favorite go-to spot in London?

I did, for many years — I even worked there for a while as well… I consider them really good friends, almost an extended family of sorts. Whenever I’m back in Antwerp I always drop by to say hi and catch up. Living in London is a bit of a luxury for comics fans because there are so many shops that cater to all. My “local” would be Gosh! Comics, which is where my pull list lies, but equally I drop by the Orbital guys and Forbidden Planet.

I’ve reduced my pull list significantly in recent months. I’ve started to buy the majority of my singles digitally now (saves me a lot of shelf space!). The one thing I keep on my pull list are all the Hellboy/Mignola related titles for one, supplemented by graphic novels and hardcovers that I see whenever I’m in the shops.

I’m pretty much following the bulk of Image’s current lineup, which is amazingly strong, and a few Marvel X-titles and DC/Vertigo series — The Wake in particular, but I don’t always find the time to read everything. I usually follow creators around, rather than series or characters in particular.

What led you to London, and what makes it a great city to live in for you as a designer? That is, if you draw much inspiration from your surroundings?

I initially moved to London in the summer of 2000 because I was offered a job at an American design company that I really liked, and because I felt I couldn’t do the work I wanted to do in Belgium. London had (and has) a very active, diverse design scene and I wanted to be part of that.

The first year in London really changed my outlook and attitude towards design in general and my work, and instilled discipline that I still adhere to and feed off today. Fourteen years on I still love living and working here.

What does your workplace look like? And what tools do you mostly use? Is it all digital, or do you do preparatory ‘material’ work too?

I’ve run a home studio for many years, in part inspired by growing up reading about comic artists’ setups… you can check its ‘evolution’ on my flickr. It’s a mix between what you’d consider a design office, and an artist bullpen. Most of my work – the output at least – is all digital, either ending up on screen or going to print; but most of it always starts with pen and paper. 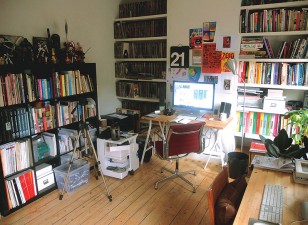 Since you’ve done movie design work as well: what comic book movies are you most excited about this season?

I’ve seen Captain America: The Winter Soldier, which I really enjoyed. I thought it was a really clever mash up of a “comic book movie” with a political conspiracy thriller. I’ve also seen Noah — which isn’t a comic book movie per se, but having been involved with the graphic novel it has some links to the medium — which I also liked a lot.

It’s a film that isn’t as straightforward or one sided as people might think. I wasn’t that interested in the Amazing Spider-Man sequel (I felt the previous film was a superfluous reboot), but I really like the almost acidic brightness. The same goes for the new X-Men movie; I’ll go probably go and see that too. The one I’m most excited about however is Gareth Edwards’ Godzilla.