A sociopath with humor and heart.

Harley Quinn has a certain homicidal charm and can-do attitude that makes her the Ann Marie or Carrie Bradshaw of the DC Universe. Her moral compass may be a bit skewed, but the big (and somewhat misguided) heart revealed in the character since her debut in Batman: The Animated Series flourishes in the capable hands of writers Amanda Conner and Jimmy Palmiotti.

At the end of Issue #0, Harley Quinn’s self-storage unit is blown up by a bomb left behind by her former flame, Mr. J. And as she’s contemplating her next move, a lawyer shows up to inform her that a former patient at Arkham Asylum has died and left her an apartment building in Coney Island, New York. Issue #1 begins with Harley riding her motorcycle laden with the remnants of her belongings to the Big Apple.

The initial scene is hilarious as artist Chad Harden captures all the elements of Harley’s macabre humor and bad-assed persona with an impossibly over-packed Harley-Davidson that she deftly manipulates through traffic while rescuing an abused dog and fending off an assassin because there is a price on her head. Upon arriving at Coney Island, she discovers that her building houses a freak show, and Harley is instantly at home. Harden’s art brings Harley alive.

Rather than just serve up a single adventure bringing Harley to a new city, Conner and Palmiotti give us a workable plot and they give Harley a mission. The attorney informs her that she is responsible for back taxes, current real estate taxes, insurance, and upkeep for the entire building. The New 52 version of Harley has bleached white skin, red and black hair that replaces the harlequin hat she used to wear, and an outfit that shows more skin. And the new creative team is making the most of all her talents. Dr. Harleen Quinzel is back on the job hunt, and Harley can’t resist a second job with more action—the roller derby. 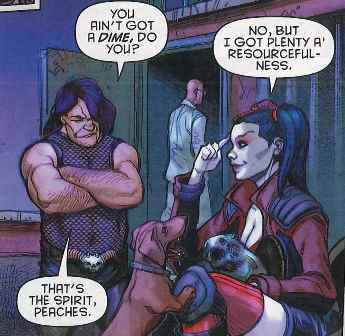 Add Harley Quinn to your pull list now. It’s a comic with a solid plot, interesting supporting characters, and an unpredictable main character with responsibility not just for her own welfare but those of others, as well. Harley has grown up, remained true to herself in the most grisly of ways, and is going to literally kick ass. This book is off to a great start.