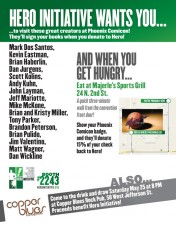 Hero Initiative, the charity that comic creators in medical and financial need, will hit the Phoenix Comicon (www.PhoenixComicon.com) Memorial Day weekend at the Phoenix Convention Center from Friday May 23 through Sunday, May 26. Hero will have 30 comic creators all over the floor collecting at their own tables to help raise money for fellow comic creators in need, including Teenage Mutant Ninja Turtles co-creator Kevin Eastman, who will be doing sketches at booth #2422 and donating the proceeds to Hero. Make sure you check him out!

On Friday, make sure to stop by Majerle’s Sports Grill located at 24 North 2nd St., a mere three-minute walk from the convention center. Show your Phoenix Comicon program, and Majerle’s will donate 15% of your bill back to Hero Initiative. So eat and drink up!

Hero Initiative will be at booth #2243 all weekend. Stop by to say hello, or grab something to add to your collection! See you there!