Joris Vermassen, aka stand-up comedian Fritz Van Den Heuvel, conveys an emotional heartbreaker about the impact of the dying upon the living, and how defeat in the face of death can be just as lethal to the ones that survive. 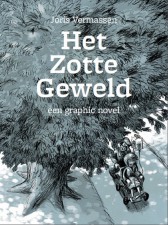 While struggling with his career, a midlife crisis and a terminally ill sister, stand-up comedian Tom Steurs desperately tries to keep his and his sister’s spirits up. But what is the use of fighting against the seemingly unstoppable, and how do you comfort yourself when the unthinkable happens?

Dealing with loss is a universal theme, and the graphic novel is often considered a universal tag for the navel-gazing of alt-comics creators detailing their disappointments in life on paper.

What those critics fail to consider is that these cathartic experiences can lead to great literature and a deep participation, pulling in people from all over the world in an ubiquitous emotional process. That is the experience that Joris Vermassen successfully captures in Mad With Joy.

Joris Vermassen – resident in Belgium –  is a teacher, artist, researcher and stand-up comedian. It should come as no surprise then that he has a good handle on what makes a human being tick, as humour often pinpoints our inadequacies spot on.

Vermassen’s scenario is touching and emotional, and the protagonist has a nice character arc and growth process. The creator avoids the trap of being overly compassionate and stays away from the tearjerkers; his protagonist, Tom, comes across as a real human being and the focus is squarely on him and his anxieties.

The graphic novel touches upon serious issues, but Vermassen’s comic timing makes sure that the reading process never gets weighed down in misery. His gift for switching between seriousness and laughter and finding humour in the most dire of situations lends the book a rather uplifting mood.

By drawing parallels between Tom’s own life and that of Belgian sculptor/artist Rik Wouters, himself a rather tragic figure, Vermassen succeeds in elevating Mad With Joy beyond just the human interest approach. The statue prominent in the GN was sculpted by Wouters, and its philosophy of celebrating life hangs as a dark cloud upon the story. Vermassen touches upon a universal constant: namely that life, with all its splendour and grandness, is also about suffering.

Loose and deceptive, Vermassen’s linework goes back to the “big nose” style of Franco-Belgian comics, while injecting it with some of Don Rosa’s bodily contortions. The cartoony approach never stands in the way of the story, though: if anything, its oddly shortened corporeal physicality enhances the inherent tragedy of Mad With Joy. And while the loose linework enhances the rage and chaos of Tom’s existence, the duotone coloring puts the emphasis on the painful loss that encircles his life.

In his first graphic novel, Joris Vermassen succeeds in walking the tightrope between a laugh and a tear. Mad With Joy is as much a celebration of life as an ode to intimacy.

Mad With Joy (Het Zotte Geweld) by Joris Vermassen is published in Dutch by Publishing House Vrijdag. It is a duotone softcover counting 128 pages and retails for €16.90.