Overuse of exposition and slow moving story hurts a great take on an underused character and some of the best art of Leonard Kirk’s career.

The Ultimate version of Rick Jones was introduced in the pages of Ultimate Comics Spider-Man shortly after the “Ultimatum” event. Brian Bendis and Takeshi Miyazawa’s interpretation of the character was that the Watchers of the Ultimate Universe had chosen Rick Jones to be that universe’s protector. The concept had yet to be touched again until now in Joshua Fialkov and Leonard Kirk’s opening chapter of Hunger.

Without realizing a Kree/Chitauri war is being waged, Rick has abandoned his post in space to return to Earth for a cheeseburger. It’s a silly idea on the surface, but when you realize that Rick has been on duty for the past year, without having another living soul to talk to and no guidance, it’s an instantly sympathetic moment for a homesick teenager to fly home for a burger.

Even more than Spider-Man, the Ultimate Rick Jones character is all about power and responsibility. At least Pete gets some off time. Rick spends his life defending his universe with little-to-no rest, relaxation, or recognition. The burger run allows him to indulge, if only to temporarily relieve some of his burden.

Of course he’s not able to skirt his responsibilities for long. Before he can even take a bite of that burger, the Watcher transports Rick back to space and shows him the destruction of this war, warning Rick of the inevitable coming of both Gah Lak Tus (the Ultimate Galactus as introduced by Warren Ellis years ago) and the Jack Kirby Galactus himself.

This space battle is where Leonard Kirk really shines on art, but Fialkov’s writing takes a hit. Kirk’s space battles are chaotic and crazy and Jesus Aburtov’s bright colors show the cosmic scope. The panel where Galactus reaches through universes gives the impression that reality is tearing as simply as paper in the devourer’s hands. 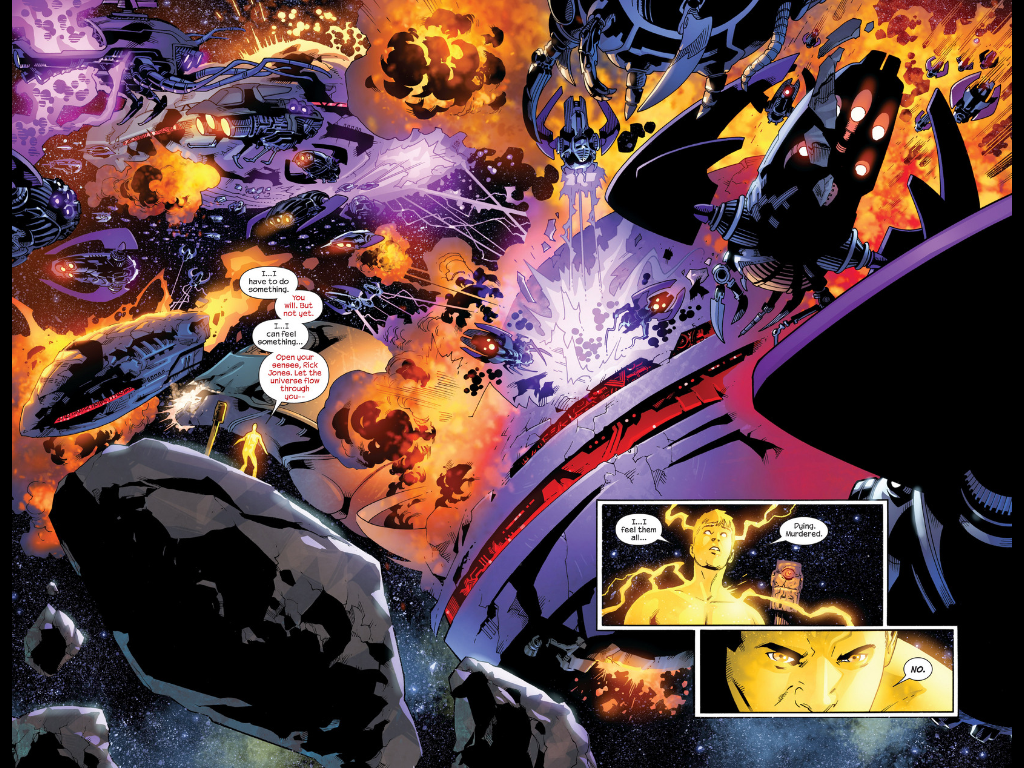 But unfortunately this sequence is too long and relies too much on narration from the Watcher when Kirk and Aburtov’s dynamic panels would’ve been able to speak for themselves. Worse, it relegates our protagonist to little more than a background character for the entire second half of the issue.

Sprinkled between the laser blasts of space war is a sympathetic character who gives the readers someone to latch on to, but this issue does little more than establish what we already know from Age of Ultron #10. Ultimately, those interested should jump on the series, but wait until next month’s issue. You haven’t missed much yet.