BROKEN FRONTIER AT 20! Perhaps unsurprisingly many of our team at Broken Frontier are hugely talented artists in their own right. Over the last few years such luminaries of the indie scene as Jenny Robins and EdieOP have been part of the BF family, and it’s a trend that continues to this day with a large chunk of our current team involved in creative practice of their own. As part of  our ‘Inside Look’ features for the BF anniversary then, it seems most fitting to give a nod to the hard-working BFers who make the site what it is. Today’s feature is from reviewer Rebecca Burke who provides us with an artist commentary on her own minicomics and zines.

This Inside Look piece will reveal some behind-the-scenes of my recent autobiographical comics and zines – For A Period of Time, Where Are You Going? and Fitting In (A Sex Zine). When people ask me what sort of comics I make, as they always do when I say I make comics (which, by the way, I told everyone before and after I quit my actual day-job), I’m always torn. For me, my comics have been either firmly fantasy (my early Kickstarter-funded comics were about a talking tree…), or firmly grounded in my own reality (my more recent diary comics and zines).

During COVID-19, I started making diary comics. These were very much as you would expect; mini comics that documented my daily life in a very realistic manner, besides one exception: 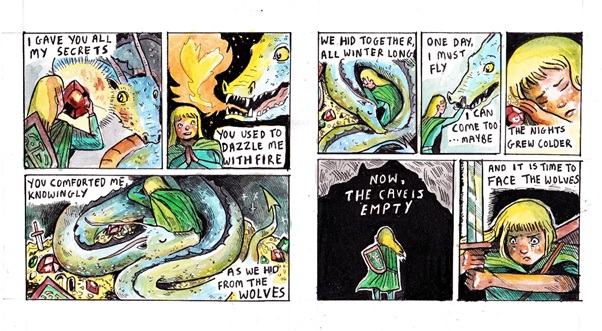 I made this diary comic, titled Secret keeper, just after the rather intense dissolution of a four-year relationship (does it still count as ‘diary’ comic when it is hidden through a high fantasy lens?). My experience felt too overwhelming to portray realistically, and without even thinking about it I found myself turning my emotions into fantasy. Maybe that first comic about my break-up was reflexive, a desire to hide the details of the real situation, a slight chuckle to let everyone know: “Yes, this one is a little bit heavy, but don’t worry – it’s not real!”. Or even, a desperate act to hide that reality from myself. I guess you could say that my immediate response to losing my anointed secret-keeper was to become my own.

After this, my (diary) comics swayed back into being more obviously autobiographical, and this trajectory continued. Eventually, I wanted to destroy the very notion of secret-keeper. Why should select parts of my life only be revealed in “secrets” – what is it about those bits and pieces that I feel I need to self-censor?

So, I decided to share my secrets. As a result of this resolve, my first self-published, self-funded comic was about period pain. This publication was the accumulation of having previously shared little bits, small breadcrumbs, to test the structural integrity of my route – whispers to close friends, to work colleagues, some mentions during a Graphic Narratives workshop, previews of my comic, and then, the full comic ready for purchase. By anyone. Anywhere. To read about my periods! I felt relieved. 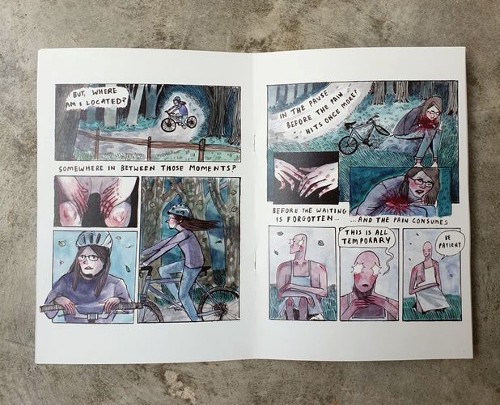 Then came a time where I was consumed with trying to find a new day-job. I needed change. I craved change. I had been doing the same job for almost three years when I had told myself it would just be for one. I excused myself due to the pandemic crisis, but I had finally returned to London and wanted something to show for it. 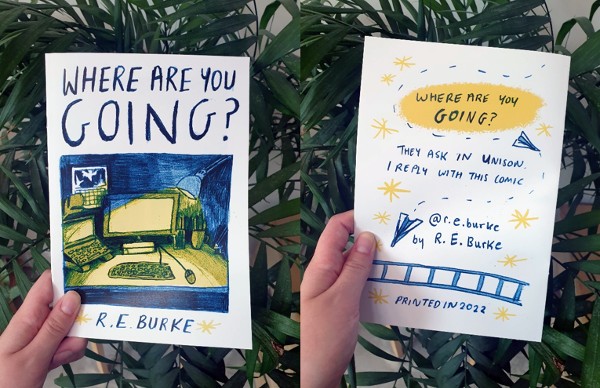 At first, I wanted this comic to be riso-printed. However, I messed up the pagination and wasted an entire risograph workshop printing useless copies. In the end, I digitised it but kept the minimal colour palette that I had wanted to use when it was planned as a risograph.

I like the digital effects I was able to add, emphasising the technological aspects of my previous (home) office-job. I quit my day-job when my request to go part-time was rejected, and my reaction to this news made me realise I had to give it a go – if only to rule out the persistent “what if…?” that had nestled inside my mind.

Why stop here? I had more secrets to share. Secrets to un-secret. Secrets to cast out for all to see. I realised these secrets of mine had been weighing down on me; if I were to keep them secret, as I felt I should, as it seemed others must be doing, I was agreeing with the idea that it needed to be kept inside. I was denying others who struggled with the same things that I did the chance for feeling that little bit less alone.

An area I felt truly alone in was my issues surrounding sex: having sex, knowing what I wanted with sex, and struggling to talk about this in a world where it seemed everyone else was having sex just fine thank you very much. 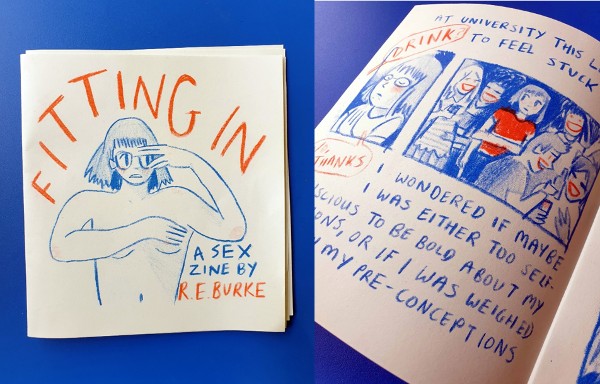 Quitting my job meant more time for riso-printing workshops. I made my sex zine during these workshops (this time double-checking the page order beforehand). Already, the process of making it and collating it was observed by others. Each step of bringing this zine into being forced me to start sharing my story. My story is about a condition called Vaginismus, something I didn’t know about until I resorted to online forums to find out what exactly was going on. It is a condition that can cause pain during sex and even inability to have penetrative sex. I wanted to make this zine to show any others who struggle that they are not alone. Despite what the media presents, we cannot all so easily fall into love-making.

I have, however, fallen in love with sharing my secrets. Lots of the news during the pandemic focussed on the detrimental effects of loneliness, and I think keeping secrets can lead to profound isolation. For me, at least, sharing has helped me feel understood and less alone. Give it a try.

P.S. you can get a copy of all these comics  via my online shop, linked below.