Today finally marks the day that Johsua Fialkov and Joe Infurnari have been teasing for almost a month. Today, The Bunker‘s first issue finally sees release. The mysterious project has been a question on the minds of many fans and we have an interview with the creators to discuss the first issue and what we can expect from the title’s future.

BROKEN FRONTIER: As a sucker for viral marketing, I’ve really enjoyed the cryptic “Your future ends…” tagline and the sense of coming doom from your book’s campaign. It reminds me a lot of the Cloverfield marketing. Whose idea was this mysterious marketing rather than traditionally pitching the book?

JOSHUA HALE FIALKOV: Well, with the book being available with no real delay, we felt like we could keep a good amount of it a mystery until it’s time to actually sell the thing, y’know?    But I think Joe gets credit for the awesome web site with the ticker.  It’s really been a unique experience for me, in that Joe and I really do everything together.  Not just the book is collaborative, but the business, marketing, and promotion as well.

JOE INFURNARI:  I’m glad it stuck with you. When putting this together, we thought that one of the big ideas of the book is how these characters are forced to consider their future after reading the letters. Any ideas they had about their future and what they were going to do with their lives…ended. So I think that was the genesis of the “Your future ends…”

The book’s got a price tag of $1.99 per issue, which is welcome compared to the digital comics that launch at regular print price. Did you guys ever consider a pay what you want method instead, for those who still want to pay less to sample, or even those that want to pay a couple extra dollars to support their favorite creators?

JOSH: Yeah, $3.99 digital comics are a mystery to me.  It’s not helping anybody, other than I suppose the theoretical extra revenue, but I suspect it turns off more than it attracts.

We talked about the pay what you want model, and early on that was the plan, but, frankly, we wanted people to know that we value what we’re doing and that to us this is the same quality product as anything you get from Marvel or DC, and therefore, it should be paid for.  The price is also there to put the onus on us to stay on schedule and deliver on our promise to our readers.

JOE: Like Josh mentioned, we did consider that. I still feel it’s a valid model but there needed to be a modest entrance fee for this experience and so the compromise was to go with the $1.99 price point. It’s nothing anybody would bicker over but enough so that we can cover costs and stay motivated to deliver this story on time, every month. 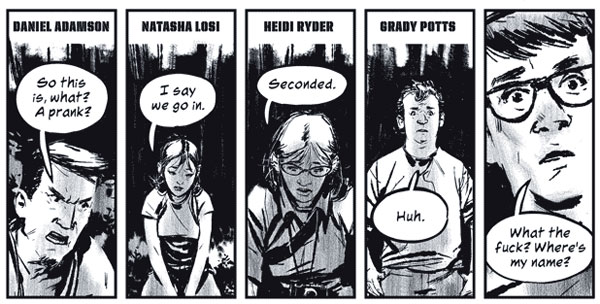 The opening images of the book feature a stark contrast between the purple light (the time machine?) and the surrounding blacks, whites, and grays. The issue itself is all black and white. Are the beginning images hints that we might see a coloring style similar to Sin City (black and white with an occasional object or person in color)? Or is that all the color we will see in the series.

JOSH:  It’s subtle, but, actually, the book is duo-toned.  Joe’s got a deft touch at using design and style to subconsciously drive story and emotion, and that’s something you’re definitely going to be seeing more of as we move on through the story.

JOE: It’s true, the colors do correlate. There’s a subtle color tinge to the past, present and future. I think this will help cue readers down the road. I’m sure it will also create a tension as these timelines coalesce and inform each other.

The story itself takes place in the present, while also providing a glimpse into the future. How much are the present and the future going to be balanced in this series? Will there be dual stories taking places in both times, or are you concentrating specifically on the present?

JOSH: Well, issue #2 takes place in the present and the past, and issue 3 takes place predominantly in the future… We’re going to play with time as much as we can, in part because discovering the story and where we need to go from month to month is always a flexible journey, but also because we want to weave the biggest  story quilt you’ve ever seen.  I look forward to having to hire someone to help us track our own continuity.

LOST is mentioned specifically in this first issue, and has been brought up by some of the media in talking about the story. How much did the TV show inspire this series?

JOSH: That’s a bit of an homage right there.  The show is a personal favorite of mine, and I think we have it as a model of the joys and perils of doing this kind of story.  We’re in a place where we want to stay honest and emotionally true, while also telling a complete, engaging plot.  I think Lost succeeded on both of those fronts, but know a lot of people don’t feel that way, so, thinking about what works and what doesn’t helps.  The other big touch stone for us in 20th Century Boys by Naoki Urasawa, and I openly admit that this is my attempt to do something on the same scale as that series, at least in terms of scope. 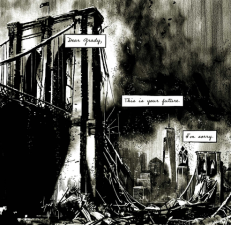 JOE: I’ll admit that I loved LOST, too, but I think I’m not as devout as Josh. For those who felt the last season failed to live up to the show’s promise, I’ll do what I can to keep Josh on target; him or whoever we hire to sort it out. One thing’s for sure. This is not a dream.

Related to both of the last two questions, I’m curious if the story will focus on a different character each issue or will Grady always be the main character?

JOSH: There’ll be different POVs every issue… Our first arc follows each of the five main characters as they come to terms with what their letters say and mean.  But then, after that, we’re left with a lot of wiggle room to tell stories however we think it can be the most compelling.   It’s all just so exciting for me as a writer, and knowing that Joe can do it all, from the smallest conversation to the biggest sprawling wasteland.

One of the most interesting aspects of this series compared to other time travel stories is that the dystopian future we get a glimpse of isn’t something that is trying to be avoided, instead Grady is told that he needs to make sure this future happens. Was the reversal of that trope part of the initial inspiration for the series?

JOSH: It’s right in the middle of what excites me about it.  These characters are all friends, but, friends lie. Friends deceive.  And then, there’s also the fact that we lie to ourselves on a daily basis, so, what does that mean when you’re ‘talking’ to your future self? How much of what they learn can they REALLY trust?  It’s going to be so much fun exploring that.

JOE: Yeah, this is a really unique twist. I think as we get to know these characters more and we see them manipulate, lie and cheat on each other the question will be raised, is it possible that their futures selves could be lying?

These characters seem to be early into their careers. How much of this series is about facing what you become in later in life? Will we see these characters go through the stages in their life that are hinted at?

JOSH: That’s the plan.  I look at this as a chance to tell a reflective story that also has a ticking clock.  These characters have to look at the decisions they’ve made BEFORE they’ve made them.  What that does to your life, and how it drastically alters who you are as a person, is for me, an amazing story engine, and one that I couldn’t be happier to be exploring with Joe.

JOE: The image I have in mind is if our lives were model trains. All our actions in our younger life are very much goal oriented and the play book seems well defined: good grades, graduation, college, pick your major, graduate, career. Our characters have come through this and in many ways have been rather successful at this standardized responsible adult recipe.

That is, until they enter The Bunker. What happens there takes them off the telegraphed trajectory of their lives and places that model train engine off these tracks and into an unfamiliar landscape. Their only map to their destination, the future, being the letters.

The Bunker is available to download digitally at $1.99 on thebunkercomic.com and comiXology.