THOUGHT BUBBLE 2022! To say I am far more interested in Zoe Thorogood’s work when it’s her own pure and unfiltered artistic vision rather than when she’s illustrating someone else’s stories would be a somewhat entitled statement. Bills need to be paid and profiles need the boost that such projects bring after all. So let’s reframe that slightly and say I wish we lived in a world where Zoe Thorogood could concentrate entirely on her own personal projects like the autobiographical It’s Lonely at the Centre of the Earth, published this week by Image Comics. When Thorogood’s The Impending Blindness of Billie Scott was released from Avery Hill Publishing a couple of years back it was it was undoubtedly the most confident debut graphic novel I had read since Tillie Walden’s The End of Summer a few years before. And I have read an awful lot of debut books in the last two decades at Broken Frontier… 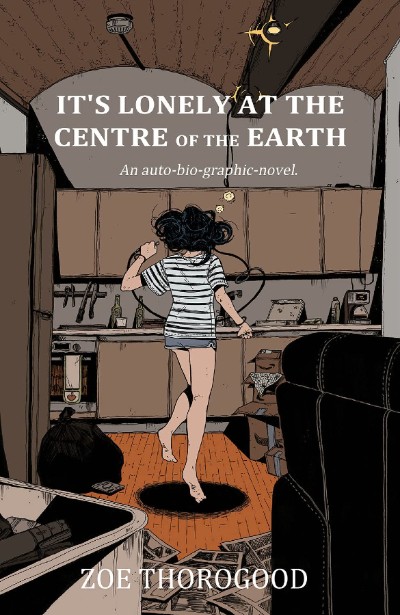 Thorogood’s It’s Lonely at the Centre of the Earth is a complex, layered and often difficult to easily define graphic memoir that spirals out from a deceptively simple premise. At age 23 Thorogood looks to chart six months of her life from a mental health perspective, exploring that struggle with depression with frequent reference to her past history of suicidal thoughts. It’s a study of “a selfish artist” whose existence and driving motivations are inextricably linked with her creativity, as she looks to make sense of her world and herself.

One of the more disappointing trends I have noted over the last couple of years has been a degree of pushback from a small but vocal minority in regards to comics practice dealing with mental health awareness. It’s a baffling phenomenon; the unwanted offspring of an unhealthy union between obscene privilege and a performative rejection of empathy. For whatever reason work like this is created its importance is immeasurable, whether that’s in normalising how depression can be debilitating for many, reminding people that they are not alone, or as an exercise in authorial catharsis. 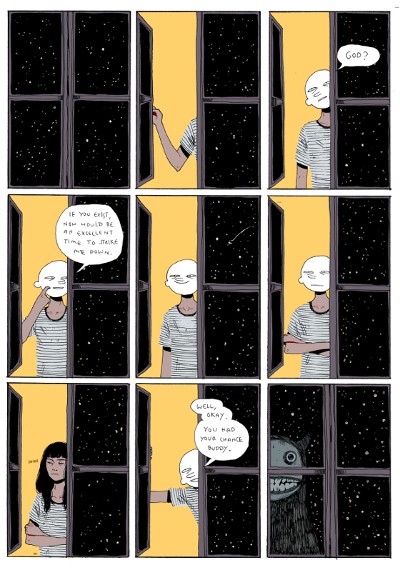 It’s Lonely at the Centre of the Earth sits in a place all of its own in this sub-genre of graphic medicine. It’s an intricately meta book with frequent commentary on its own creation being a running theme throughout. Thorogood makes use of a number of avatars representing different periods of her life or different aspects of her personality, with her depression anthropomorphised as a constantly lurking, self-satisfied ghoul. As we follow her across the months we watch her coming to terms with reader reactions to The Impending Blindness of Billie Scott, her social awkwardness at conventions, and an ill-fated relationship on a trip to the States. While at the same time she continues to feel like her life is falling apart…

The ever shifting approach in narrative presentation allows us to appreciate the story from a number of different vantage points; to act as both observer and confidante as the book progresses. Thorogood switches from speaking directly to the reader, to interacting with her other iterations and to narrating in the third person, all allowing us to absorb each sequence on different empathetic levels. Indeed, when she uses one particular visual trick of covering her face with narration boxes rather than dehumanising her through that enforced concealment the result is ironically the exact opposite, connecting us to her as narrator even more intimately. 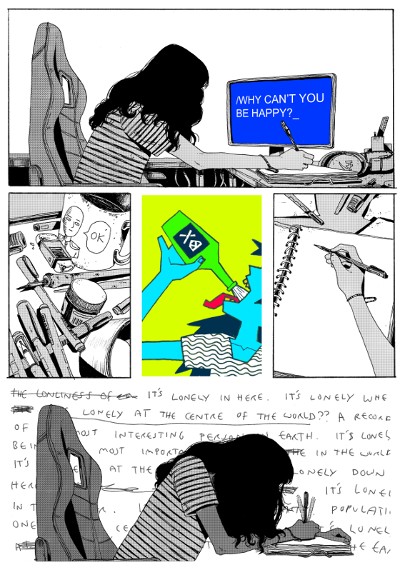 This is where It’s Lonely at the Centre of the Earth is at its most triumphant as a piece of comics craft. To use the form, its tools, its possibilities and its potential in so many disparate ways to reflect mood, mindset and reactions to environment is the mark of an artist with the keenest understanding of the canvas of the comics page. Replete with visual metaphor It’s Lonely at the Centre of the Earth employs photo inserts, bursts of colour to emphasise mood changes, collage, some incredibly clever lettering choices to supplement theme and tone, and occasional step-backs into plot and art breakdowns.

This is a visceral book; one that hits us on an instinctual, emotional level as much as it does on an intellectual, interpretive one. It’s one where the contrast between implying and inferring is an important one, with raw emotion spilling out onto the page in all its chaotic, rambling veracity; a procession of interlinked storytelling digressions that in turn stream out from each other into new narrative tributaries before interweaving once again. Thorogood is uncompromising in her candour and portrayal of herself. Self-doubt wrestles with self-recrimination for dominance. At times she doubts her own anxiety, characterising it as a performance and equating it with self-indulgence. And her desire for identity, definition, self-discovery and self-understanding often tailing off into the bleakest nihilism. 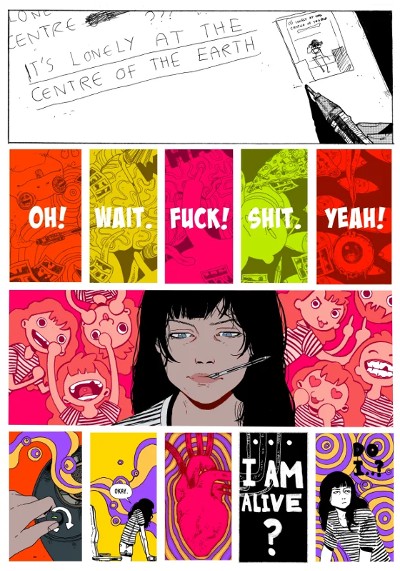 But here’s the thing. There’s the deepest profundity to the flippancy with which Thorogood often dismisses her struggles and worth here. It’s certainly not narcissistic. Work like this is valuable, it’s important, it’s absolutely essential… it’s an undeniable acknowledgement that discussions around mental health need to be far more prevalent, far more transparent, and far more accepted. That Thorogood portrays all this in a graphic vernacular that we not so much read as absorb only makes it all the more powerful.

Thorogood is, though, as accomplished a writer as she is an artist as seen in her often near lyrical sentences and her pithy moments of revelation. It’s Lonely at the Centre of the Earth is, quite simply, a comics masterpiece. If you are ever looking for a book that serves as the ultimate example of comics that do things that only comics can then this should be your go-to tome. It’s that significant.

Remember that “language of comics” thing I’m always banging on about? It’s Lonely at the Centre of the Earth is speaking it in a whole new dialect. Without hesitation I can honestly say this my chosen top graphic novel of 2022. I suspect it may well be yours as well.