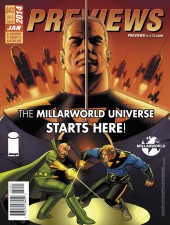 On our front cover, Joss Whedon’s fan-favorite heroine Buffy returns in Buffy the Vampire Slayer Season 10 #1 from Dark Horse Comics!  On the back cover, Mark Millar (Kick-Ass) goes cosmic with his next Millarworld series from Image Comics, Starlight!

Gems of the Month: January’s PREVIEWS Gems of the Month include: Greg Rucka’s newest heroine, an amnesiac found in the subway who must piece her life back together, in Dark Horse Comics’s Veil; Paul Dini and Joe Quinones’ new original graphic novel, Black Canary and Zatanna: Bloodspell, from DC Comics; IDW Publishing reaches anniversary issues in their vintage Hasbro series with G.I. Joe: A Real American Hero #200 and Transformers: Regeneration One #100; Mark Millar puts his own stamp on the classic pulp sci-fi heroes of yore, who traveled the universe in spaceships with rocket fins, in his new Millarworld Universe title from Image Comics, Starlight; and Warren Ellis takes the reins of Marc Spector in his new Moon Knight series from Marvel Comics! 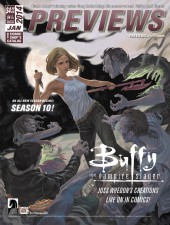 Splash: PREVIEWS shines a special spotlight at some of the blockbuster books and products coming this March, including Matt Murdock’s move to San Francisco in Mark Waid and Chris Samnee’s Daredevil #1 from Marvel Comics; a look ahead to C-Day 2014 with Avatar Press’ Crossed: Badlands #50; the next chapter in Alan Moore and Kevin O’Neill’s The League of Extraordinary Gentlemen spin-off series Nemo from Top Shelf, Roses of Berlin; Eaglemoss’ Star Trek: The Official Starships Collection special that focuses on the Enterprise from J.J. Abrams’ films; this month’s special Naruto section; and many more products you have to look forward to!

PREVIEWS Exclusive Apparel: Each month PREVIEWS offers comic book fans and pop culture aficionados a selection of t-shirts and other apparel that can only be found in your local comic shop! There are new t-shirts and hoodies based on the upcoming film, Captain America: The Winter Soldier, new Valiant Entertainment shirts with Bloodshot and Unity, new Transformers and Teenage Mutant Ninja Turtles designs, and, of course, a cute new My Little Pony Shirt! Plus, many other fan-favorite properties. Whatever you need to look sharp this spring, PREVIEWS has you covered!

Plus: Staff Picks, the month’s Certified Cool books, the monthly Bestseller Charts, and so much more!

All this awaits you in the January edition of PREVIEWS, which goes on sale at your local comic shop or specialty store on Wednesday, January 1st with a cover price of just $4.50.