What do you get when you forget to put the heart of a classic novel into its graphic adaptation? The Stranger by Jacques Ferrandez, based on the book by Albert Camus. 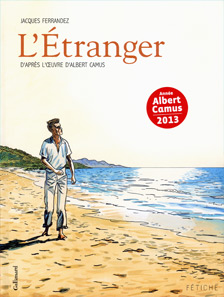 As this French graphic novel was part of the official selection of the Angoulême Comics Festival 2014, I was looking quite forward to reading the book.

In the right hands, Camus’ masterpiece of existentialism could lend itself quite easily to metaphoric imagery, where an artist can play with time and mood on the page – a big part of the novel. However, what I ended up with was a shorter version of the novel, free of subtext and atmosphere.

When the French Algerian Meursault arrives at a seaside town to witness his mother’s burial, he seems unmoved by the proceedings. After Meursault befriends his neighbor Raymond Sintés, the two get into trouble with Arabs, one of whom Meursault shoots for apparently no reason. Throughout the subsequent trial, Meursault refuses to show any kind of emotion, even when confronted by the girl he loves (or, at least, who loves him) or God.

The novel from 1942 is all attitude. In the philosophy of existentialism, the only sane response to a chaotic and absurd world is  disorientation and bewilderment. It is this attitude that Meursault propagates, and it is the raison d’être for his distanced demeanor. This stands in sharp contrast to his surroundings, as his girlfriend is passionate and his friend Sintés prone to violent outbursts.

What a graphic novel of The Stranger absolutely needs to convey is this dichotomy between the outer world (as represented by Meursault’s friends) and the inner world (Meursault himself, the philosopher). And it is in this area that artist and writer Ferrandez fails so spectacularly. 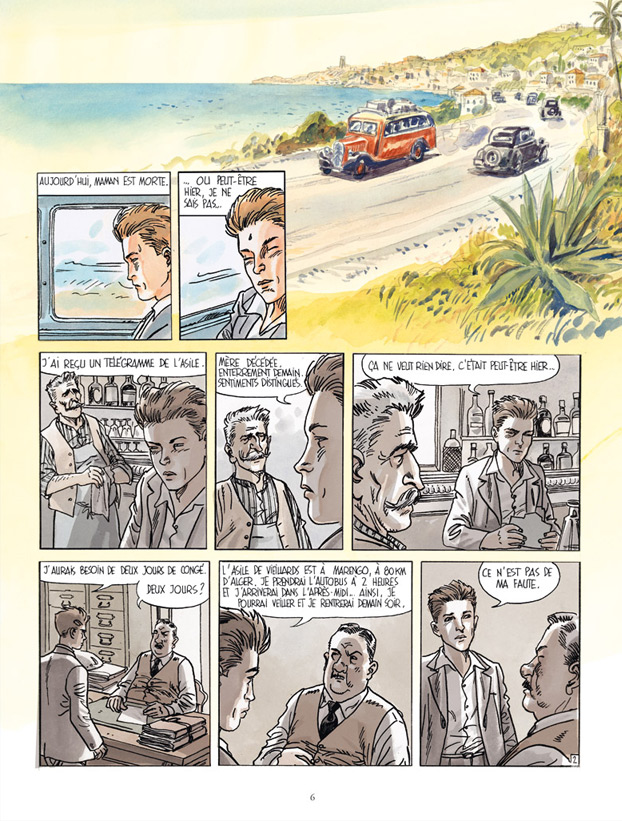 Although there’s a nice ephemeral quality to the watercolour paintings Ferrandez spreads throughout the book, and the warm colours certainly evoke the Mediterranean, the  body language and facial features of his characters are stiff and static, which is a shame because that is where the book should come alive.

While that style befits the stoic attitude of Meursault, the other characters should revel in life’s lighter and darker sides while the protagonist stands to the side, enhancing his own detached behavior. The passion he chooses to exclude from his own life should be made even clearer in other characters, embodying the philosophy that is the backbone of the book. Alas, that is not the case. 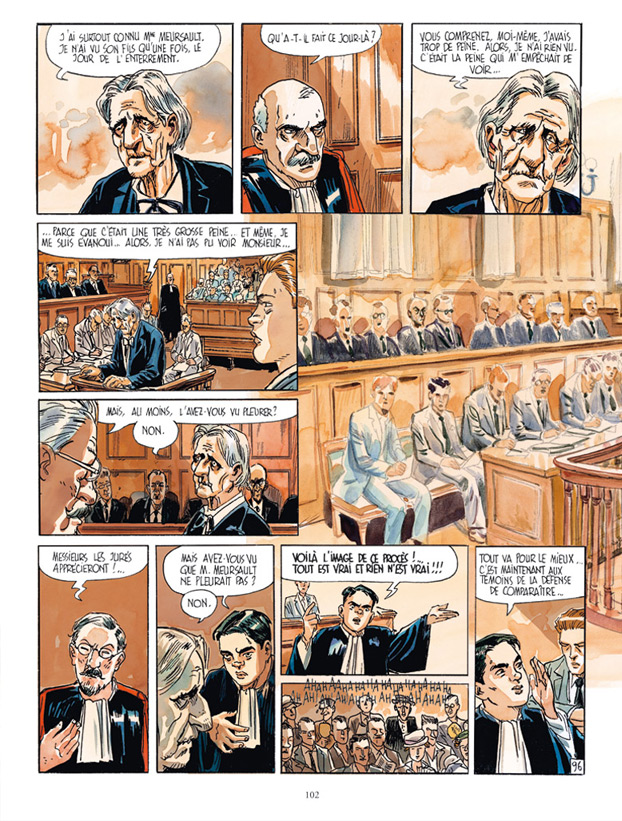 The Stranger by Jacques Ferrandez is a bland, concise retelling of the novel that fails to add any personal interpretation on the part of the author – surely a prerequisite of any visual adaptation of a literary book.

The author charged ahead and produced a fine looking graphic novel, but forgot to look for the soul of the original novel. One can only imagine how this would have turned out in the hands of a more allegorical artist such as Lorenzo Mattotti.

The Stranger by Jacques Ferrandez is published in Dutch by Blloan and in French by Gallimard. It is a full-colour 136-page hardback, retailing for €19,95.