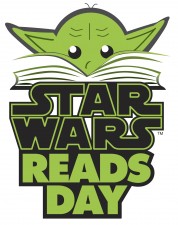 “Star Wars Reads Day is the kind of initiative that we at Lucasfilm love to support” says Carol Roeder, Director of Publishing at Lucasfilm.  “Reading and Star Wars have gone hand-in-hand since 1976, when the novelization of the original Star Wars movie was released.  Over the years, many fans have discovered the joy in reading through Star Wars books, and we hope to continue encouraging more people to read.”

An official Star Wars event kit (free of charge), including reproducible activity sheets and trivia, will be available for download at: http://starwars.com/reads/