Captivating. Clear your schedule when pick up Volume 2, you won’t be able to put it down.

While some might worry at the prospect of turning over the creative reins of one’s award-winning world to others, Petersen relished the opportunity to once again collaborate with some of his favorite creators. “The Canterbury Tales–esque nature of the contributors’ stories being the fables of my world means that the fans and I get wonderfully creative stories that don’t need to perfectly fit into my major mouse continuity,” Petersen wrote in the foreword. “I trust them to make great stories.”

And they have. The creators effectively pull you into their stories and add to the mythos of the brave and unwaveringly loyal Guard through tales of adventures big and small using new characters who overcome great odds or conquer private challenges to show us the grand potential of the determined spirit. 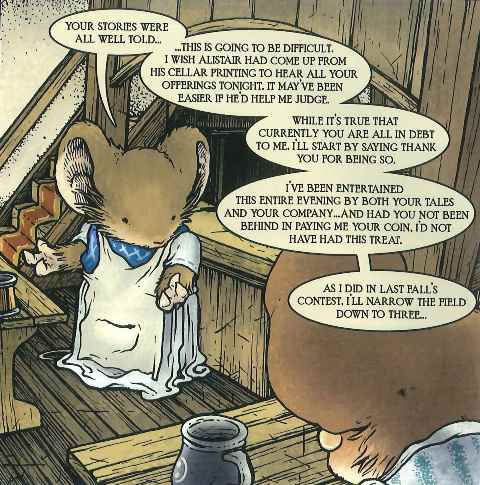 The stunning artwork throughout includes every medium and method for creating comics you can imagine, and you’re going to love it. No one plots out panels like Stan Sakai, no one draws pleading eyes like Christian Slade, and no one uses color quite like Jackson Sze. The workmanship of each story is evident—these stories were crafted with care and deliberation.

Is this volume a point at which new readers can comfortably jump in? It is…but you’ll get more emotional reward from it if you have already read Fall 1152 and Winter 1152. Prior understanding of the perilous world of the Guard Mice and the scope of their sacrifices lends much weight to the tales of folklore presented in Legends of the Guard. So jump in here and you’ll enjoy the book and no doubt go looking for the previous releases. Or wait until you’re all caught up and can appreciate the craftsmanship at work. Either way, this title is headed for a well-deserved Eisner nomination and everyone’s “Best of 2013” lists. And if you are last-minute Christmas shopping, even non-comics fans will enjoy this.