Artists’ Alley is definitely the most inspirational place to be at any con, and I talked to a lot of terrific people at C2E2.

It’s definitely a creative recharge to hang out in Artists’ Alley. I asked the creators what they were working on, and almost all of them turned the question around and asked me the same thing. It was a lot of fun.

I took one look at the seriously long line to enter the con on Saturday morning and decided that hanging out in the Press Room for 15 minutes to get organized and make some notes was a brilliant idea.

When you avoid that long line and walk the massive lobby of McCormick Place, you’re usually treated to some excellent costumed adventurers. Have your camera app ready! 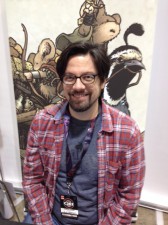 Mouse Guard creator David Petersen’s table was my first stop of the day. He is currently working on a collected edition of his Free Comic Book Day stories that will also include two previously unpublished stories; it should hit the shelves in November. And he confirmed that Mouse Guard: Legends of the Guard, Volume 3 is in the works. 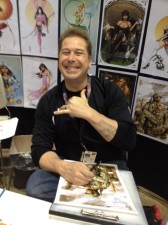 The upbeat Billy Tucci is always fun to talk to. He has a Kickstarter project launching in May that celebrates the upcoming 20th anniversary of his creator-owned title Shi. The story also takes place 20 years after the events of the original; Shi is a mom in her mid-forties when, as Billy says, “She has a nice life and then everything goes to hell.” 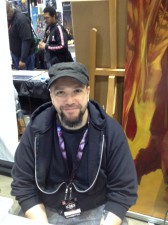 Eric Powell has a Goon one-shot coming out in June, and the book will switch to a mini-series format in July. The first four-issue arc is called ‘Occasion of Revenge’.  Powell is also writing a comics version of Big Trouble in Little China that debuts in June. If you’ve never seen that crazy film, it’s a cult-classic treat and not to be missed. 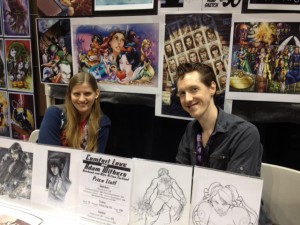 Comfort Love and Adam Withers have their hands full these days with The Uniques. “We are really busy, but it’s the good kind of busy,” Withers said. They’re going to re-release the first Uniques story in a “Director’s Cut” version that will include some new content and will be a great opportunity to jump on board this title. 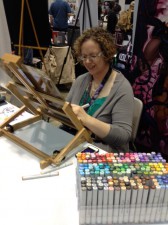 Colorist Laura Martin (shown here hard at work and with a set of Copic markers to die for) has a number of projects in the works, including finishing up fan-favorite Serenity: Leaves on the Wind.

“Real Heroes with Brian Hitch is a fun story,” Martin said. “I have Superman with John Romita Jr. and that’s a daunting job because everyone knows Superman and the New 52 look is established, but I’ll bring my own look to it.”

She’s also working on Ragnarok, written by Walt Simonson, which will be out in June from IDW. “And the fifth book I’m working on now is Armor Hunters, an X-O spinoff from Valiant that debuts in July,” she added. “I’m working off pencils only, so that’s a good challenge.” 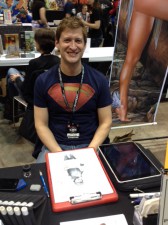 Gabriel Hernandez is taking the summer off to work on some personal projects and develop some ideas to pitch to publishers. It was nice to talk to him about the creative recharge you get when you work on bringing your own stuff to life. He has a very infectious enthusiasm for comics and the creative process, so I hope he has a productive summer and I’ll be looking forward to seeing what he comes up with. 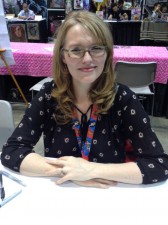 Earth 2 artist Nicola Scott is always fun to talk to. Her work on Teen Titans and Earth 2 has given her a terrific perspective on hero teams and the proportions that have to be considered when all of the characters appear in the panel. For Earth 2, she is working on the upcoming 30-page #25. “Fans will love Issue #26, it’s a battle royale,” Scott said. “And then with issue #27, Earth 2 goes weekly, so I’ll stay busy!” 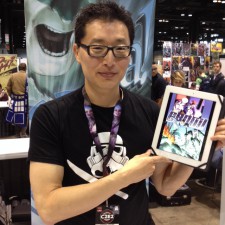 Finally, Gene Ha is preparing a Kickstarter project set to launch in August to fund his newest story, Mae. It’s the tale of two sisters from Indiana. The older sister finds a doorway to another world and has all sorts of adventures before finding her way back to her sister three years later. All kinds of mayhem will ensue. Mark your calendars for this one!

That’s it for this instalment of my C2E2 adventures, I’ll wrap it up with Part 3. If you ever get the chance to stop by Artists’ Alley at a con and meet these creators in person, you will be glad you did.